Many “littles” await a Big Brother or Big Sister 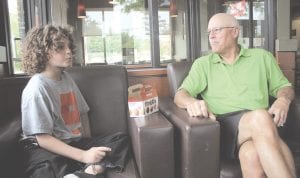 GENESEE COUNTY — Although there are dozens of kids in Genesee County waiting for Big Brother or Big Sister mentors, Sebastian,10, is one of the lucky few who, before he even had a chance to be interviewed for this story, got his big brother, Jerry Warner.

It was perhaps serendipitous, that Warner’s wife, Lynn, is big sister to Sebastian’s sister, but nonetheless, it seems like a good match. Sebastian is enthusiastic about the outdoors, and the Warner’s has ten acres out in Goodrich where he has already taken a drive on the tractor and learned all about ‘suicide’ knobs—a knob on the steering wheel which used to be standard in cars but is now only allowed on certain vehicles as men’s shirt sleeves used to get caught on them and cause accidents, Jerry explained.

Curls which are the envy of most young ladies, frame a beautifully freckled face, and Sebastian said he wants to grow it out to donate to a child with cancer—even though some of the boys his age make fun of his hair.

His mom, Stephanie, told him, “Just tell them you don’t care—the chicks dig it,” which seems to be the plan. Jerry gave Sebastian a trial run at the circus in January before getting their official match paperwork just recently.

“And one thing led to another,” Jerry said. Sebastian also learned to drive a four-wheeler and said chicken dinners on the farm are the best thing ever. There is a plan for shooting off rockets in the near future when the wind is right.

They also went to see End Game and Sebastian happily educated Jerry on what all was going on and they want to hit the beach this year and other outdoor activities including golf and introduce him to public service opportunities and how to give back and contribute.

Warner taught in Goodrich schools for 37 years and says he wants to instill an appreciation for education in Sebastian, whose favorite subject so far is writing. Jerry taught science and hopes to help him appreciate that more as well.

Maybe a little bit on the shy side, Kristian is a young Davison resident who is looking for a big brother. When asked what kind of big brother he might be interested in, Kristian was hoping for someone as close to his own age as possible and had to be convinced it would probably be a good idea to have someone of driving age.

His interests seem pretty typical for a 6-year-old, T-ball, video games, swimming, going to the park and the playground. But a big brother might help him expand his interests. Maybe with a future career in comedy, Kristian informed the writer his favorite subject in school was recess, but he really enjoys math.

He has no siblings and hopes maybe to go to a big beach on the ocean and also enjoys bowling. He also hopes his big brother, however old will have young point of view.