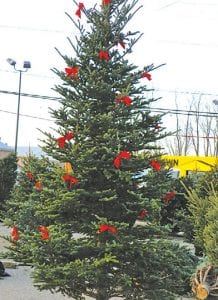 This decked out Frazier fir is a 13-footer but not as tall as the 15-footers for sale. Seven to eightfeet trees are the norm.

FLINT TWP. — Some families make a traditional trek to the woods or a tree farm to cut their own. Some make do with an artificial tree. Others who prefer the look and smell of a live tree can find one at a nearby outdoor lot at this time of year.

A recent tree shopper who would only identify herself as Rose, of Flint, has been buying her live tree for many years at the Christmas tree lot in the parking lot of the Kmart on Miller Road.

Operated by Hugh Bowling of Fruitful Acres Farms in Bear Lake, the lot has been occupying that corner for about 23 years, said salesman Matt Sarinopoulos who’s been on the job five years himself. It is one of two Christmas tree lots issued operating permits by the township board this year. Another is on Corunna Road just west of Dutcher.

Business is picking up as it gets closer to Christmas and the “kissing balls’’ are already sold out, Sarinopoulos said. But not to worry, he says more are coming.

Rose chose a Fraser fir because she likes to leave her tree up a long time. Sarinopoulos estimated it will be three to four months before the tree loses its looks.

He’s got Douglas firs, Black Hill, Blue and Norway spruces and Scotch Pine on the lot too. But Blue Spruces tend to be a strong seller because they are popular with older customers who remember them for their childhood Christmases.

People who don’t mind spending $40 to $60 go with the firs, Sarinopoulos said. He’s got one 13 and half-foot Fraser fir on the lot decorated with red bows but it’s dwarfed by a couple of 15-footers also for sale. Sarinopoulos said he sold three of the five tall trees last year.

After helping Rose select her tree, Sarinopoulos bundled it, cross-cut the bottom to help with watering and anchoring and loaded it into her car.

Not planning to start decorating for three days, Rose asked for advice on caring for the tree.

Some helpful tips on the care and safety of using live trees have been posted by the Flint Township Fire Department on the township’s website at www.flinttownship.org, supplied by the National Fire Protection Association (NFPA) Public Education Division.

One of every three home Christmas tree fires are caused by electrical problems, according to the NFPA. Though uncommon, those fires have a higher tendency to be deadly. A heat source — such a fireplaces, radiators, heat vents, lights, candles — too close to the tree causes one in five of those fires and can spread very quickly.

NFPA recommends choosing a tree with fresh, green needles that do not fall off when touched. Water the tree daily and throw it out when it dries out. The website posting offers more advice on choosing lights and decorations for the tree.