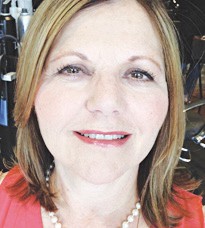 Marden has lived in Richfield Township her entire life growing up on Rich Street with her family. She graduated from Davison High School in 1971, a year later married Leonard Marden and has been married for 48 years. Due to her husband actively serving in the Air Force during Vietnam, Marden had to relocate with orders.

After her marriage in 1972, her husband was ordered to Clovis, New Mexico. Marden attended Eastern New Mexico University to work towards her nursing degree while working on a medical/ surgical floor in Clovis Hospital.

Her husband was then given orders to relocate to Ipswich, England. She was then hired into Ipswich hospital as a phlebotomist. She finished her education at the Ipswich School of Nursing in England and obtained her State Enrolled Nursing License (SEN). In 1978 she chose to relocate back home to Davison.

“After traveling the world, I chose to come back home to Richfield Township to raise my family. I love my community and was excited to return,” she said.

Marden said she had the opportunity to live in other places, but she chose to come back to her hometown.

The couple have three children: Johnathan, Matthew and Jenna. She also has a grandson Johnathan II who attends Davison Schools.

Marden says her priorities include making sure the township is financially sound, reducing the wasteful spending to lower the tax burden on the residents, maintain strong police and fire departments, fixing our roads, and bumping up transparency on the board.

“My top priority are the Richfield Township residents,” she said.

“I’ve spent over 50 years in the medical field and have helped many people,” said Marden. “Now, I am looking to help the people of Richfield Township by serving as Trustee.’’

If Marden wins, she would be the first female Trustee in decades.

“If you are like me and are looking for a fresh perspective on the Richfield Township Board, with new ideas and thinking, I ask for your vote,” said Marden.