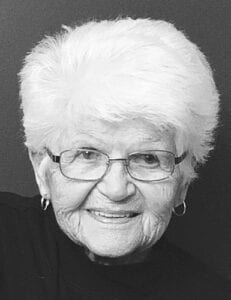 Margaret was born in Detroit, on April 8, 1926, the daughter of Mr. and Mrs. Charles and Margaret (Woodward) Raley. Educated locally, Margaret attended the Michigan School for the Deaf until the 10th grade, when she was called home to watch her nieces while their fathers went off to war. In June of the year 1950, Margaret married Harry Hursin. Their union would bear five children. Sadly, he preceded her in death on May 27, 1972. Margaret was a US Postal worker for 25 years. Margaret was very active in the deaf community and spent much of her time with the Detroit Association of the Deaf, Flint Association of the Deaf and Flint Deaf Senior Citizens. Margaret was a very independent woman and continued to drive her own vehicle until January 2020. Margaret’s last wish was to have a great-grandchild in her lifetime and that wish came true when her great-granddaughter was born 3 days before her 93rd birthday. In her free time, Margaret enjoyed playing euchre, 500 and many other games, traveling and spending time with her family.

Margaret was preceded in death by her parents; husband, Harry; and her four siblings.

In accordance with Margaret’s wishes, cremation has taken place. A Memorial Service will be held at a later date. Expressions of sympathy may be directed to Margaret’s tribute page at martinfuneralhome.com.