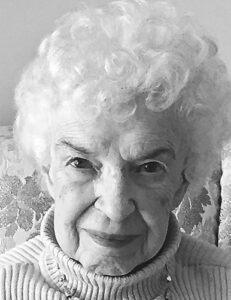 MARION NORINE LAVICTOIRE, 100, of Davison, passed away Wednesday, July 28, 2021 at McLaren Lapeer Region. A Funeral Service was held 1 p.m. Monday, August 2, 2021 at Allen Funeral Home, 9136 Davison Road, Davison, MI 48423; Pastor Jerome Taylor officiated. Interment immediately followed the service in Davison Cemetery. Visitation was from 11 a.m. until the time of service on Monday. In lieu of flowers, memorial contributions may be made to Eastgate Baptist Church.

Marion was born in Davison, MI on November 7, 1920, the youngest daughter of the late Herbert and Ethel Lundy. She grew up on a large dairy farm and attended Bentley Schools until transferring to Davison High School and graduating in the class of 1939. She joined many other women who worked in the Flint factories during the war effort. Marion married Richard Stephens on March 28, 1942. He was killed in action April 4,1945 in Okinawa. She married James LaVictoire October 13, 1946. Jim was a widowed war veteran with a three-year old daughter, Margaret. Jim and Marion owned and operated LaVictoire Insurance Agency in Davison until Jim’s passing on October 10, 1992.