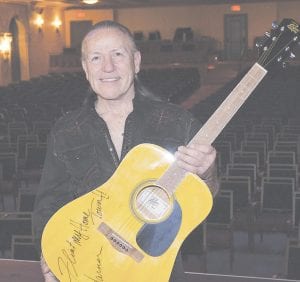 Mark Farner and his American Band will kick off his 50th Anniversary Tour at the Capitol Theatre in Flint. Photo by Ben Gagnon

Decades later, he will be returning to his hometown of Flint to perform on the Capitol stage for the first time.

Farner, along with his American Band and special guest The Guess Who, will kick off his 50th Anniversary Tour with a concert at the Capitol Theatre on April 19. The show will celebrate Farner’s musical career and highlight many of the Grand Funk Railroad songs that drove the group to stardom in the 1970s.

“Coming here to Flint to launch this anniversary (tour) is monumental in my heart and in my soul,” Farner said. “These are my people, my hometown, where a lot of great music was born and is still being born today.”

When the Capitol Theatre building was undergoing renovations a few years ago, Farner visited the site and began to envision what it would be like to perform his music there. He lauded the theatre for its natural acoustics and spacious yet intimate setting.

“For me to kick off the tour here at the Capitol, it’s one of those ‘pinch me’ deals,” he said. “I love the venue. It’s gonna rock.”

Farner said that his tour will provide a powerful, nostalgic experience for Grand Funk fans, filled with legendary hits like “I’m Your Captain (Closer to Home),” “Some Kind of Wonderful,” and “We’re An American Band.” He also wants to stir the musical musings of concertgoers.

“We need to get back to our imaginations… get back to a point where music touched us,” he said. “Back when we were playing, there weren’t many music videos. Each fan had their own ‘video’ running (in their minds) as they were listening to words in the songs.”

After playing with local band Terry Knight and the Pack in the mid- 1960s, Farner co-founded Grand Funk Railroad in 1969 and became its lead guitarist, lead singer and main songwriter. Grand Funk quickly grew into an overnight sensation, selling millions of records worldwide, notching multiple gold and platinum albums and filling arenas across the country.

When Grand Funk disbanded in 1976, Farner embarked on a successful solo career in the hard rock and Christian Contemporary genres. He also rejoined Grand Funk Railroad for reunion stints in the 1980s and 90s and collaborated with other legends in the music industry.

For Farner, 70, the drive to continue performing doesn’t lie in accolades and awards; he said that he’s motivated by a desire to spread a message of love and freedom to fans around the globe.

“The songs are about love, stopping war and getting people to say: ‘let’s be peaceful for the sake of love,’” he said. “The music also asks questions and gets personal…and people rally to hear that music.”

Farner’s 50th Anniversary Tour is currently set to perform in over 20 cities across the United States and South America. Farner’s American Band will also perform in Detroit on July 19 at Rocking the River.

Tickets for Farner’s kick-off show at the Capitol Theatre are now available at the Whiting box office, over the phone at 810-237-7333 and online at thewhiting.com. Visit markfarner.com to catch up on tour details and Farner’s latest projects.