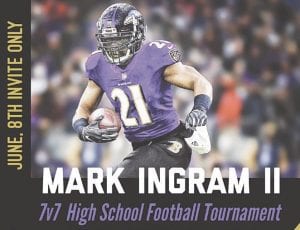 Seven local teams to be announced will be playing.

Ingram, who is now with the Ravens, starred as a freshman at Grand Blanc High from his first day on the field. However, following his junior season, he transferred to Flint Southwestern, where he began to catch the eye of college coaches, playing running back, defensive back, kick returner and punt returner.

He would go on to play college ball at Alabama, where he won the 2009 Heisman Trophy, the first in school history, as well as the national championship. He was selected 28th overall in the first round of the 2011 NFL Draft by the New Orleans Saints, with whom he spent eight seasons prior to his recent signing with Baltimore. – B.P.