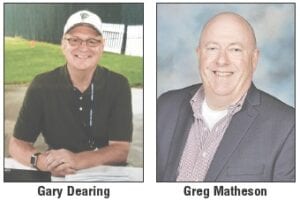 Matheson, a 10-year resident of Flushing, was selected as the FASC’s new executive director in early June and has been serving in that capacity since June 8. He is succeeding former Executive Director Gary Dearing, who retired on May 29.

“I feel honored and grateful to be chosen for this position, and I’m very thankful for the vote of confidence from the senior center board,” Matheson said. “I’m looking forward to getting to meet people face-to-face and establish new relationships.”

Matheson, 54, is preparing to retire soon from his current elementary principal position at North Branch Elementary School. After 30 years in public education, he said that he wanted to explore a new opportunity for community service—this time in his hometown of Flushing.

“I was fortunate that this position happened to open up here at the senior center,” Matheson said. “As a Flushing resident, I knew I had to put my hat in the ring and apply.”

In the short-term, Matheson said he is eager to get more senior center programs up and running this summer. The FASC has been gradually reopening since mid-June after being shut down for nearly three months during the COVID-19 pandemic.

Down the road, Matheson said that he wants to expand activities and services at the senior center and focus closely on the interests of Flushing’s senior citizen population.

Matheson said that he has some big shoes to fill in taking over for Gary Dearing, who served for four years at the helm for the senior center.

“Gary has taken a lot of ownership in what goes on at the center,” Matheson said. “I would like to thank him and Karen (Herriman), our office manager, for making this a seamless transition.”

For his part, Dearing said that he will miss directing operations at the senior center and helping to connect seniors with local agencies and services.

“It was great getting to know all the seniors and figuring out how we could create new programming for them,” he said. “I also enjoyed being a part of the Senior Winter Games and providing one-on-one computer classes.”

As executive director, Dearing helped to oversee the FASC’s collaboration with Flushing Community Schools, which enabled the center to gain access to the Early Childhood Center (ECC) to hold pickleball games in the school gym and woodshop classes in the basement. Dearing also drew from his architectural background to make repairs to the roof over the senior center lunchroom and to oversee the completion of sidewalk repairs and a barrier-free access ramp.

Fresh into his retirement, Dearing, 62, said he plans to spend more time with his wife, daughter and three grandkids. But he also intends to volunteer at the senior center whenever he can.

To see programs currently being offered by the Flushing Area Senior Center, visit flushingseniorcenter.com or contact the center at 810-659-4735.