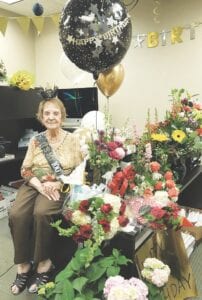 GRAND BLANC — Matilda Rizik left for work Friday morning expecting it to be just another day at the law offices of Rizik and Rizik.

Was she ever surprised to find cars lined up around the building, and so many people waiting to wish her a happy birthday.

Rizik turned 100 years old on Sunday, Aug. 2. She still works full-time as office manager at the firm her sons Michael and George own. And, she still drives to work every day in her little red sportscar.

“It was really a surprise, a really big surprise,” she said.

The secretarial staff stayed at the office until 9 p.m. the night before to decorate with lights and banners, she said.

The procession of well-wishers continued for three hours.

Rizik grew up in St. Louis, Missouri. She became a registered nurse, having studied at City Hospital in St. Louis, and was in charge of the preemie nursery.

She met her husband, Michael, at a religious shrine in Ohio, and soon retired from nursing and moved to Michigan, where the couple had seven children in nine years. Michael Rizik, Sr., an accountant, passed away in 2007.

Matilda Rizik began her second career, at the law offices, in 1980. She was 69 years old at the time.

“My sons are attorneys here,” she said. “One morning, they realized everyone was leaving me by myself, and they decided I should go to work.”

Since then, she has worked Monday through Friday, and sometimes on Saturday, doing “anything and everything, whatever needs to be done” including processing mail, managing accounts receivable and accounts payable, and acting as quartermaster for the office and trusted confidante for those who work and visit there.

“It’s a law office and it’s hard to say exactly what everyone does,” she said.

She keeps busy outside the office, too. According to family and staff, she drives to Davison for her regular hairdresser appointment with Linda Dahl-Vincent every Saturday morning. That’s followed by lunch or early dinner with family. Mrs. Rizik enjoys dining at Lucky’s Steakhouse, and recommends the stuffed grouper with a side of creamed spinach.

When asked the secret to her longevity, she nonchalantly responds, “Who knows?”

Her next goal is to celebrate 101 years next August, and 32 years as office manager.

Her co-workers say they think she deserves as raise.