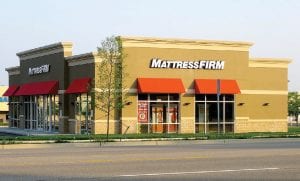 Mattress Firm is set to open a new store on Miller Road on Aug. 8. It is the first of two stores in Genesee County opening this month.

FLINT TWP. — A Mattress Firm store at 4051 Miller Rd is set to open on Friday, Aug. 8. It is the first of two new Michigan locations for the Houston-TX-based specialty bedding chain.

A second store at 932 S Center Road in Flint near Courtland Center Mall is scheduled to open Aug. 22, according to Derrick Cox, market manager for northeast Michigan. These will be the 10th and 11th Michigan locations, joining 1,500 company-operated and franchised stores in 36 states.

The Miller Road store at Pirates Plaza is on a site formerly occupied for many years by Underwood’s vacuum cleaner and furniture store.

At about 5,000 square feet, it is among the largest sized Mattress Firm stores. Three employees have been hired and one or two more are being sought, Cox said.

The Grand Opening will be announced with signs, banners and other decorations inside and out. Refreshments will be served and a “Save the Tax’’ event will offer taxfree purchases during opening week, Aug. 8-15 (excluding Tempurpedic and Icomfort mattresses).

“We also have the best policies and guarantees in place to ensure each person gets the best price, and finds the right mattress for their needs,” Cox said.

The store also will bring to the community its philanthropic Mattress Firm Foundation, which has a national focus on pancreatic cancer awareness and research. Stores sell a brand of pillows called Lux Living and adjustable bases called Firmcare, from which a portion of proceeds is directed to fund pancreatic cancer research.

Additionally, at the local level, Mattress Firm typically gets involved with causes like Toys for Tots, the Salvation Army’s “Rock the Red Kettle,” and local food pantries and rescue missions.