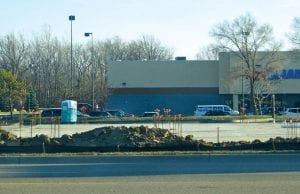 The foundation was recently poured for a Mattress Firm store, the second new build in Pirates Plaza on Miller Road in recent months.

FLINT TWP. — A Mattress Firm store under construction on Miller Road may be one of the first in Michigan for the Houston, Tex.-based retailer. Currently no Michigan locations are listed on the company’s website.

It is being built on a lot fronting Pirates Plaza, formerly occupied by Underwood’s vacuum cleaner and furniture store at 4051 Miller Rd. that was razed.

It is the second new build in that plaza this year where a Five Below store was recently constructed as part of a redesign of a former Circuit City store.

Mattress Firm touts itself as the nation’s premier specialty bedding retailer with the largest footprint in the United States among retailers selling multiple mattress brands.

It is unknown at this time how many jobs will be provided but construction should be completed by early spring.

Site plans were approved weeks ago by the township’s Planning Commission and a building permit was issued in late November, according to Tracey Tucker, economic enhancement director.

Typical Mattress Firm stores are about 4,800 square feet in size.

There currently are about 1,326 stores operating in 87 markets and 33 states, according to information on the company’s website at www.mattressfirm.com