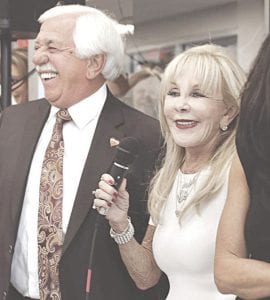 FLINT — When Maureen LaFontaine walked through one of her family’s dealerships in the LaFontaine Automotive Group, you could feel her presence as she talked with employees and addressed many of them by name.

That’s the kind of relationship she shared with so many people, and why there was such a sense of loss at her unexpected passing on Monday, Oct. 28, at age 73.

LaFontaine, known affectionately as ‘Madre’ to all who knew her, was a pioneer for women in the automotive industry. She was a stay-at-home mom during the early years of raising her family with her husband, Michael, but began her own career selling cars when her youngest son, Ryan, was 6 years old, and became a dealer principal in 1984.

Eventually, the LaFontaines grew their business, LaFontaine Automotive Group, which they founded in 1980, to 36 retail franchises and seven collision centers, including 17 locations in Michigan.

She was determined to succeed in a male-dominated business, always with her family at the heart of each decision. “My husband and I discussed that if, God forbid, anything ever happened to him, how would I be able to get our children through college and have the lifestyle we wanted for them,” she said, in an interview with Automotive News in 2010, when she was recognized as one of the “100 Leading Women in the North American Auto Industry.

But to her family, LaFontaine was far more than a business founder and dealership owner.

“My mom was a true firecracker and lived life to the fullest,” said Ryan, now the chief operating officer of LaFontaine Automotive Group, in a statement. “Her motto was ‘Faith, Family and Friends,’ and we were all inspired by her dedication to giving back and always putting the customer and community first.”

She was very active with local chambers of commerce, Rotary clubs and other charitable organizations. She also supported the efforts of her son, Ryan, and daughter, Kelley, who founded the U CAN-CER VIVE Foundation after Ryan’s successful battle with non-Hodgkin’s lymphoma in 2008. The foundation has raised over $2.5 million for cancer research.

“We lost our mother, best friend, mentor and guiding light,” said Kelly, vice president. “There is no question my mom’s vision, leadership and heart are at the core of everything we do at LaFontaine Automotive Group.”

LaFontaine was a devoted “Madre” to her four children, Christie, Mike, Jr., Kelley and Ryan, and ‘Nana” to her 15 grandchildren.

Her funeral service was Nov. 2 at LaFontaine Buick-GMC-Cadillac at 4000 Highland Rd. in Highland. A funeral liturgy was held Nov. 4 at the Church of the Holy Spirit, 3700 N. Harvey Lake Rd., Highland.

The family is directing donations to the U CAN-CER VIVE Foundation.