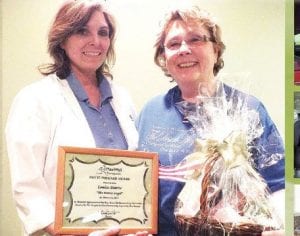 FLINT TWP. — A local resident’s selfless hard work and dedication is being recognized as the March 2014 winner of the “Pay It Forward” program at Maxwell Therapy LLC.

Louise Downs may look like your average grandmother, but she is much more than that. Downs wears many hats, including senior caregiver, “Violet the Klutzy Klown” for hospice patients, active church member at Walton Blvd. Church of God in Pontiac, volunteer for various organizations including the American Legion, Sons of the American Legion, DAV, VFW, — the list goes on and on. But perhaps the most impressive hat she wears is a halo.

Dubbed the “Desert Angel” by soldiers overseas, Downs has been changing the world one box at a time. It all began with a box of cookies in October 2001, only a month after the 9-11 attacks in New York City. Then a group of members from her church became involved. Little by little, her ministry grew.

One of those hearts touched was Jillayne Maxwell, owner of Max Well Therapy, LLC. “We were requesting nominees, and when I heard about all the time and effort Louise has put in for the benefit of our troops, it was obvious that this wonderful lady deserves to be acknowledged and thus she has been chosen as our Pay it Forward recipient for March 2014,” said Maxwell. “Thank you Louise for all you do!”

“Our Pay it Forward program is our way of recognizing those individuals in our community who give of their time and effort for the benefit of others and usually take little time for themselves,” Maxwell said.

Each monthly winner receives a onehour massage from one of the skilled massage therapists on staff, a certificate of recognition and most of all, the appreciation and respect of the entire community.

Max Well is currently taking nominations for the May and June recipients. If you know anyone who has given their time to others and deserves some time for themselves, nominate them for some pampering.