May the force be with you? 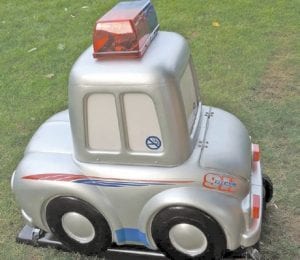 Vehicles of all shapes and sizes were displayed including this miniature remote-controlled police car.

FLINT TWP. — The township police department has hosted a National Night Out event for nearly 10 years. A few years ago, they joined forces with the police and fire departments from Swartz Creek and Mundy Township to make it an even bigger community gathering.

The annual event is designed to improve police and community relations and to emphasize public safety.

NNO provides fun for all ages but especially gives children an opportunity to meet and mingle up close with police officers, fire fighters and other civil service workers.

Whether it was stirring up a batch of cotton candy, doing a police dog demonstration, maneuvering remote mini remote control vehicles or showing off the bells and whistles and police and fire vehicles, NNO provided a variety of fun things to do..

Several vendors were on hand to explain their services and hand out freebies. There was free food and a raffle.

Police Chief George Sippert said he was pleased with the turnout, volunteer and vendor support for the event and looks forward to doing it again next year. He credited and praised Lt. James Baldwin and Sgt. James Daly as the chief organizers for the event which this year included shutting down Norko Drive at Fleckenstein to give the many emergency vehicles room to spread out. 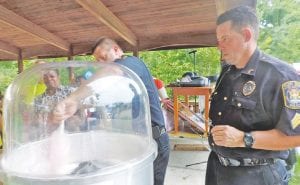 Two officers try their hand at whipping up the first batch of cotton candy. 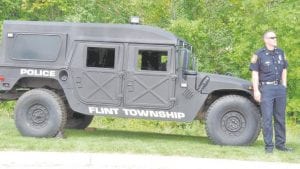