FLINT TWP. — A call came out last Thursday morning that a plane had crashed on takeoff at Bishop International Airport and Flint Township firefighters were first on the scene.

Fortunately, the call was only a “Live Disaster Drill” which is required to be held every three years to give emergency responders practice for a real event.

To begin the drill, a false alarm was placed to the airport tower signaling that an aircraft emergency has occurred. This alarm mobilized the Airport Rescue and Firefighting Unit, in addition to the following agencies: the American Red Cross, local Fire Departments, area Police Departments, County Paramedics, area Ambulances and Hospitals, Emergency Response Organizations and Agencies, Genesee County Emergency Management, MTA, the Civil Air Patrol and airline and airport employees.

A Mobile Aircraft Fire Trainer at the training site was set ablaze to simulate an actual airline incident. 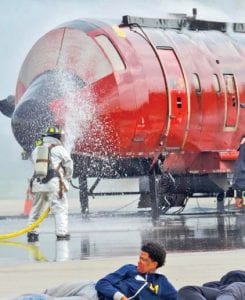 The drill included the transportation of volunteer “victims” to area hospitals for “treatment”.

Mike Burkley, assistant fire chief for Flint Township, said 15 members of his crew returned to the scene that evening for more practice drills putting out fires on the mock mobile aircraft fire trainer.