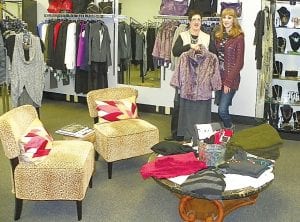 FLINT TWP. — A fashion show featuring Maynards Fashions & Cosmetics will be one of the highlights at “No Boys Allowed,’’ a women’s expo coming Nov. 4-5, hosted by Women 2 Women Michigan magazine of Grand Blanc.

“This will be our fourth event with them,’’ said Maynards owner Melodye Lee of Lennon, upholding the store’s history of supporting women’s events for much of its 30 years in business.

Getting ready for the show is no small feat considering that the store still is in transition after moving just three weeks ago.

“Fall is the busiest season in this line of business,’’ said Lee who took over the store six years ago after the retirement of founder Dorothy Maynard who ran the Flushing-based business for more than 20 years.

Adding to the time crunch, Lee is getting ready to go on a buying trip to Chicago for the spring market . But she’s taking it all in stride – a testimony to the store’s longevity and loyal customer base. Some of them have been around as long as the store.

During the move, Lee came across a box of old photographs from a long-ago fashion show featuring customers who got a kick out of seeing younger versions of themselves again.

“Some have passed away and we gave them (the photos) to their children,’’ who are another generation of Maynards shoppers, Lee said.

Known for its customer service and unique styles, Maynards draws customers from 18 to 80.

Lee kept those customers in mind when she decided to uproot the established business from Pierson Road and move it to the Lincor Plaza on Linden Road near Corunna Road. The new location is not too far from its Flushing roots but closer to customers from Grand Blanc, Linden, Clarkston and Flint.

It was time to leave the Flushing plaza because Maynards was the last tenant left there, Lee said.

“It’s about moving forward,’’ she said.

The new store has better street visibility and is drawing new customers from neighboring businesses, she said. With 1,400 square-feet, it also offers slightly more floor space.

What hasn’t changed is Maynards signature style that has made it a fixture in the women’s retail market, surviving many other long-gone independent operators from the 1980s and ‘90s.

Maynards still carries clothing, jewelry, shoes, handbags, exercise clothing, a full line of mineral make-up and “a bit of everything,’’ for the welldressed woman.

Assisted by her daughter Courtney, 19, who has worked in the store since she was 13, Lee works to get a better price point for her customers because of the economy and also tries to buy Americanmade products..

Lee’s roots in Flint fashion and beauty circles dates back to working at The Vogue, a premier women’s retailer in Flint for 77 years before closing in 1989.. Lee’s also managed a hair salon for 16 years.

Besides Maynards fashions, the Women’s Expo will offer educational speakers, how-to workshops, prizes, wine tasting and more. It takes place at the IINN Conference Center on South Saginaw Street at the south end of the Great Lakes Tech Center, from noon to 9 p.m. on Friday and 9 a.m. to 5 p.m. on Saturday. Tickets are $5 and a portion of the proceeds will benefit Old Newsboys of Flint.