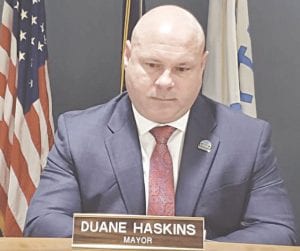 Burton Mayor Duane Haskins having a somber moment during his address regarding COVID-19 in the City of Burton. Photo from YouTube

Haskins declared a city-wide emergency March 16 and said less than 24 hours later he closed city hall to the public after seeing the number of COVID-19 cases in the state had doubled overnight.

Next, he said, he ordered all city hourly employees to stay home.

“Our state started out with two confirmed cases, as of today our great state has 12,744 confirmed cases and 479 deaths,” he said during the April 3 address. “In our city alone with have 21 confirmed cases. Michigan is number three in the nation behind New York and New Jersey.”

Haskins said when he took office just a few months ago he never would have dreamed the city, county, state, nation and world would be facing this challenge. Until a few months ago, he said his focus had been working on water rates, cutting unnecessary spending, the Census, road funding and putting together this city’s annual budget.

“Then the pandemic hit hard,” said Haskins. “As the spread of this pandemic has continued to grow, every level of government has been forced to react quickly and decisively in ways that have generally been reserved for war time emergencies. And now I have ordered all but essential first responders to stay home. City workers remain on call for emergency situations only.”

Haskins said he cancelled city sponsored events including Burton’s annual Easter Egg Hunt and the Memorial Day parade and festivities. The Burton Memorial Day race the committee is working on a way to hold a “virtual race”, but details are not yet available.

City council meetings have been suspended and will only be held to address emergency situations, he added.

Haskins defended his decision to not issue a curfew as Flint Mayor Sheldon Neely did last week, stating the executive order signed by Gov. Gretchen Whitmer already requires residents to stay at home 24 hours a day, seven days a week.

“I urge every resident of the city of Burton to take this pandemic seriously and behave responsibly by following all governmental orders and directives,” said Haskins. “Stay at home…it’s the law.”

He went on to urge residents to maintain social distancing, to wash their hands often, frequently disinfecting them, coughing into a tissue or your upper sleeve and, once again, he repeated people should stay home.

Call 911 for emergencies, he said. For non-emergencies, Haskins said he has dedicated a special police hotline to report any business or groups congregating that should not be operating during this pandemic. The hotline number is 810-742-2548 and he adds a police officer is manning that phone around the clock.

Haskins also told about how his wife is a nurse at Hurley Medical Center in the ER and had spoken to him about how difficult the pandemic has been on personnel there. He said she spoke of the emotional and physical hardship it causes for her and co-workers and how patients coming in are reporting mild symptoms and within a short time they have to be put on a ventilator due to the rapid progress of the virus.

He added that he considers health care workers to be the true heroes of the pandemic, saying there is no way we can thank them enough for what they do.

“These things are hard, they’re tough, and the only thing that’s going to make this better is if we’re following the rules and we’re staying home,” said Haskins. “We’re not congregating, we’re not taking for granted going over to grandma’s house, going over to our kids house and visiting people.”