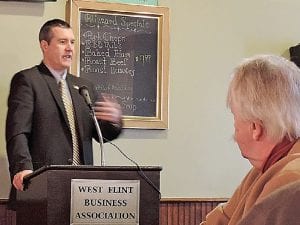 FLINT TWP. — Creating an “Innovation District” to attract a core of residents and businesses near downtown Flint is a key economic development goal of the City of Flint’s new Master Plan, said Flint Mayor Dayne Walling, who shared highlights from it last week at the West Flint Business Association meeting.

The 500-plus-page document is the city’s first comprehensive Master Plan adopted in more than 50 years and lays a blueprint for Flint developments for the next 20 years, Walling said.

He did not address how the plan would directly impact surrounding communities including Flint Township but mentioned support for collaborative regional development via the I-69 Trade Corridor Next Michigan Development Corporation.

The Innovation District is a specific strategy based on concepts identified by Michigan business leaders and being credited with urban revitalization in Boston and other major cities nationwide.

“The idea is that we work to create the places that bring together the people who are driving the economy,” Walling said.

More diversified housing including apartments are needed to build critical mass and generate interest and demand for downtown living, he said.

Details about the Innovation District are spelled out in the Economic Development & Education chapter of the Master Plan which can be read in its entirety online at www.imagineflint.com. Other key chapters cover Housing & Neighborhoods; Transportation & Mobility; Environmental Features, Open Space & Parks; Infrastructure & Community Facilities; Public Safety; Health & Welfare and Arts & Culture.

Walling credited the Master Plan, which was adopted in October 2013, with drawing millions of state and federal funds to do demolition work. He said “a great second wind for Flint” is coming this summer and fall with the relocation of the Flint Farmer’s Market to the former Flint Journal printing building; the Michigan State University College of Human Medicine, office and loft apartments moving into the old Flint Journal newspaper building; and the Genesys Health System PACE Center opening in the former International Institute building to provide medical and social services to the elderly.

Those developments alone represent about a $45 million investment in the Innovation District, Walling said.

Walling also talked about future goals stated in the Master Plan for developing the former Flint Central High School, strengthening the quality of education, and land use changes.

Walling, who was born in Flint in 1974, said the city has pretty much “been on the skids” his entire life.

“That doesn’t mean there have not been great projects and good leaders,” he said, attributing his statement to factors such as the level of violence and poverty, loss of industry, lack of jobs and other socioeconomic and political factors.

But leaving is not an option for Walling, who was elected in 2009 and said he plans to run for re-election next year.

Conceding that there is hard work ahead to turn the city around, Walling said the well-received Master Plan is a testament that city officials are serious about accomplishing that task in a professional manner.

He also stressed that accomplishing Maser Plan goals will require a cooperative effort, similar to the involvement of more than 5,000 citizens participants in creating the plan.

“I am hopeful about this community,’’ Walling said. “I would not be here putting seven days a week into this if I did not believe there are some great opportunities here.”