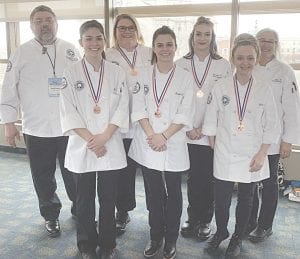 This is the 6th year that MCC has sent a team to the competition, which is based on a Jeopardy-style question and answer format that also includes sensory testing. Students must have an in-depth knowledge of math, sanitation, meat fabrication, seafood, nutrition, baking, culinary and Escoffier.

During the competition, students are tested on visual identification of equipment, utensils, food products, and they must be able to identify food items based on taste and smell. Once a question is presented, students have only 10 seconds to answer, with speed, strategy and accuracy being key components to their success.

First held at the 1992 ACF National Convention in Washington, D.C., the Baron H. Galand Culinary Knowledge Bowl is the brainchild of Carol Kelly, a member of the Nation’s Capital Chefs’ Association and a culinary instructor. She used the competition format as a way of testing her vocational high school students. The competition is named in honor of former ACF President and long-time advocate of apprentices and junior members, Baron H. Galand, CEC. — G.G.