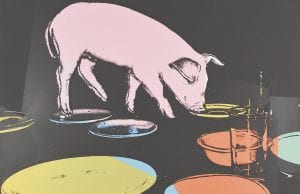 One of Andy Warhol’s works.

FLINT — The Mott Community College (MCC) Fine Arts Gallery in the Visual Arts and Design Center will present an exhibition of screen prints and photographs by Andy Warhol. These works were gifted to Mott Community College by the Warhol Foundation for the Visual Arts and the Warhol Photographic Legacy Program. Screen prints and selected photographs will be in the gallery through March 13.

Pop Art pioneer Andy Warhol (b. 1928 – d. 1987) proved to be an obsessive documentarian. Throughout the 1970s until his death in 1987 he took his cameras everywhere he went producing tens of thousands of photographs that record his extraordinary life as celebrity artist. As the creator of a multi-million dollar portrait painting business he fixed his lens on the rich and famous. Yet he also directed his focus in black and white photos on the more mundane, anonymous and somber worlds existing outside those populated by chic jetsetters.

Selected from the 162 photo and seven screenprint images donated to MCC by the Andy Warhol Photographic Legacy Program and the Andy Warhol Foundation for the Visual Arts, this exhibition explores Warhol’s routine practice of surveillance and the extensive visual record he produced. It promises to shed light on the motivating forces behind our own diaristic and voyeuristic impulses for creating a collective diary that exists in a virtual state of interconnected electronic memories on Facebook, Twitter and countless blogs.

The Fine Arts Gallery is located in the Visual Arts and Design Center on the Mott Community College main campus in Flint. Gallery hours are 9 a.m. to 4:30 p.m., Monday through Friday. Free and open to the public. For more information, call the Art and Design office at 810-762- 0443. – G.G.