MCC Honors students clown around for a cause 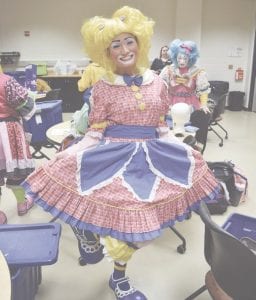 Squiggles in full costume and makeup

Sometimes a college professor is referred to as a clown by his students, but at Mott Community College, that is exactly what Dr. Brian Ivory wants.

Ivory is a 1987 graduate of the Ringling Brothers and Barnum & Bailey Clown College. In 2011 he “un-retired” from clowning to recruit and train the Mott Campus Clowns in service of the troupe’s motto: “Our hearts are bigger than our shoes.” He has worked at MCC for 18 years.

The Mott Campus Clowns are a trained clown troupe made up of honors students, and they are serious about the issue of bullying. Five years ago, the group launched a new anti-bullying project to help elementary school students.

As a course requirement, each student develops a unique clown character complete with a clown name, costume and make-up. The students also spend seven weeks rehearsing an anti-bully program they will perform this month at area schools and in the Detroit area.

Ivory started clowning around while at Michigan State University. He said, “clowning picked me.” Known on MSU’s campus as Bubbles (before he became a clown), he felt clowning was his destiny when he volunteered to organize entertainment at the 1983 Special Olympics in Mt. Pleasant.

Ivory is all business when it comes to clowning. In the middle of his interview for this article, Ivory called out to two of his students, “Razzle and Dazzle, can I get you up for your wigs please?”

As interesting as Ivory is to interview, interviewing the clowns is just as fascinating.

Squiggles, in her last semester at MCC, decided on her clown name because “it sort of describes my personality.” Squiggles’ non-clown name is Miranda Hanson, and she will soon graduate with an associate’s degree.

When asked if she would consider professional clowning as a career, Hanson said, “It really hasn’t crossed my mind, but I am really glad I did this to expand my horizons and get out of my comfort zone. “

Peanut’s first potential clown name was Spanky, which he decided against and selected Peanut “on the spur of the moment.” Peanut decided to become a clown, hoping it would “sweeten up a scholarship deal.” In high school, Peanut, whose real name is Eli Wilson, was a puppeteer, and feels that some of those performance skills transfer to clowning. Wilson is in his second year at MCC and will pursue a career in computer information systems and software development upon graduation.

The MCC honor clown program is one-of-a-kind according to Ivory. “As far as I know this is the only for-credit college class in the country where students are first of all trained as clowns, and secondly trained to do service as clowns.

“We are trained, we are ready, and we hope we are making a difference with our anti-bullying program in schools,” Ivory said, as this holder of multiple college degrees finished putting on his clown makeup.