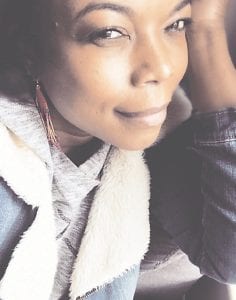 FLINT — When an opportunity arose to work on set of a local movie production, Tamara Jones-Anderson snapped it up.

Jones-Anderson, who’s a student in the Media Arts & Entertainment Technology (MAET) program at Mott Community College, was an Art Production Assistant/ Assistant Art Director for the film “Ring of Silence.” The movie, which details a true story of how human sex trafficking happens in the United States, premiered at Flint’s Capitol Theatre on Jan. 16.

From Oct. 30 through Nov. 20, Jones- Anderson worked with the movie’s director of cinematography on designing sets and assisted both the lighting and costume designers. As a set designer, she was responsible for prepping scenes and placing props in multiple location shoots across the Flint area.

“I was always very passionate about film, but after having this experience, I have an even greater passion about being able to tell amazing stories through the art of film making,” she said. “It is a joy for me.”

Jones-Anderson took the internship with the “Ring of Silence” production after one of her MAET instructors, David Rembiesa, informed her and her fellow students about opportunities to work on the film.

“Being able to work on a professional production while still in college is invaluable experience for young filmmakers,” said Rembiesa, who coordinates the MAET program. “Like Tamara, several of our media arts students have gained valuable experience while in the program, working on film sets that help them pursue a career of working in the motion picture film industry.”

After submitting her resume and cover letter to the production company, Jones- Anderson was given an interview and offered a position on the spot.

Having never worked on a movie set before, Jones-Anderson said she was excited but nervous at the prospect. She quickly adjusted to the pace of production, prep- ping sets as fast and efficiently as possible to prepare for shooting of the scenes.

“The tasks are not planned; it’s like painting a picture,” she said. “So you add a layer and step back to take a look at your work until you’ve reached a view of the story you want to tell through the eyes of the camera.”

Working on the movie can be tedious and exhausting, said Jones-Anderson, especially the 12 to 16-hour days. But the experience gave her ample opportunities to practice “patience and plenty of smiles.”

“You have to have a love for working on a movie set,” she said. “It’s very eclectic and somewhat non-structured and extremely different from a nine to five job.”

For Jones-Anderson, working on “Ring of Silence” was also an educational experience. The feature length film—written, directed and produced by mid-Michigan film maker Nicole Wallace—draws awareness to the plight of innocent teenagers who are lured into sex trafficking.

“I learned so much more than I ever knew about the theme on human trafficking and its effects,” the Flint resident said. “I am so grateful to have had a chance to be a part of this production, as this topic needs to be discussed and exposed.”

Jones-Anderson will graduate from MCC this year and plans to continue working in the film industry.