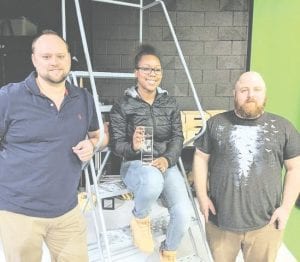 Ryan Stromer, Michael Lee, and Alyssa Brown won in the category of Best Commercial for their student video for Factory Two, a non-profit community makerspace located in the heart of downtown Flint.

NATAS honors the best television and video high school and college students in the state annually.

This year, five MCC students were nominated for the annual Student Production Award. Stromer, Lee and Brown’s first place trophy represents a first-place win for the program for the second year in a row.

“The caliber of work our students create is very high. I’m very proud of all of our students and how hard they work,” said David Rembiesa, Coordinator of the Media Arts and Entertainment (MAET) Program for MCC. “Since all entries are judged by working industry professionals, the awards are a true industry litmus test as our students pursue careers working in television, radio, film and multimedia production.”

“For community college students to be nominated, and win, alongside well- established baccalaureate programs at schools such as Michigan State, Central Michigan, Madonna and Grand Valley State speaks volumes, not only about our Media Arts program at MCC, but about what our students can achieve,” Rembiesa added.

The winning trio worked with Factory Two during the fall semester while enrolled in MCC’s advanced course in Television & Commercial Production. In this course, all students receive hands on experiential learning working with local nonprofits. Students gain valuable experience create PSA and commercials that can be used by the non-profits to promote their organization online.

The other NATAS Michigan Student Production Award nominated film from MCC this year was the long form documentary film “They’re Not There,” by Tyler Hartwig and Dontavias Smith. The nominated films can be found on the MCC Media Arts program YouTube channel titled “MAET Studios.”

The National Academy Television Arts & Sciences (NATAS) is a professional service organization dedicated to the advancement of the arts and sciences of television and related media and the promotion of creative leadership for artistic, educational and technical achievements within the television industry, best known for the coveted Emmy® Award.

The Michigan Regional Student Production Awards for excellence, which promotes best practices to university/college and high school students, is intended to be an incentive for the pursuit of excellence in television journalism and focus public attention on outstanding achievements in television produced by university/college and high school students. All entries are judged by the Michigan Chapter’s broadcast professionals. – G.G.