MCC sends in the clowns 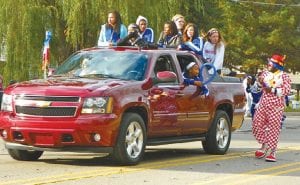 Clowns walking in the Carman-Ainsworth Homecoming Parade in October were attendees of the Mott Community College clown class.

GENESEE COUNTY — Shane Trombley of Burton was the class clown. So were nine other students.

But their teacher Brian Ivory was very happy about it.

These students not only got credit for being cut-ups, they earned it. All 10 were enrolled last semester at Mott Community College in a pilot course to learn the art of being clowns as a community service.

Honors. 251 is a laboratory course taught in tandem with Hons. 250: “Social Diversity and Civic Engagement” in which students learn human relations skills to apply to real world experiences. Clowning fulfills the course’s required 45 hours of community service and is part of a MCC initiative to incorporate service work into coursework.

Guided by Ivory, who is a 1987 graduate of the Ringling Brothers and Barnum & Bailey Clown College, the MCC students learned to shed their inhibitions and develop clown personas through the magic of face paint, colorful costumes and a cheerful spirit.

Each student was required to choose a name, create a signature costume and learn a clown skill such as face painting, juggling, balloon twisting, puppetry and pocket magic.

An attic space at the MCC library was converted into a “clown alley” where students went to paint their faces, don neon-colored wigs, bulbous noses, oversized shoes and garish costumes in a kaleidoscope of clashing palettes and patterns typical of clowns.

Adopting the motto “our hearts are bigger than our shoes,’’ they prepared to meet their public in a series of uplifting experiences that students say “changed them forever.”

Sally “Sunshine” Newman of Burton and Monica “Monte” Wolf of Flint, learned the art of face painting and Shane “Rosco” Brotherton of Flushing took up juggling.

Ketzler, a psychology major, chose her clown name Daisy because she’s a longtime florist. Thompson’s smile reveals the origins of his Dimples clown moniker and Tanner, AKA Noodles, is tall and thin. And no Trombley, AKA Beano, does not have a flatulence problem, he simply adopted his father’s nickname.

During the semester, the students appeared at numerous community events in Flint, Detroit and Lansing including the Special Olympics, nursing homes, schools and more. That was them walking and interacting with the crowds in the Carman-Ainsworth Homecoming Parade in October. They also were out in full force for the MCC Halloween Event on campus and special programs at Hurley Medical Center and Potter Elementary School.

In their next-to-last bittersweet appearance in full clown make-up and costumes, the troupe were featured guests at a faculty meeting about MCC’s goal to develop more experiential courses like theirs.

The students had so much fun some were wearing sad faces by the end of the semester.

“Many of us thought about dropping the class so we could take it again,” said Counelis. Trombley said he is seriously considering keeping Beano going “as a major hobby.”

The first troupe soon will be replaced by 10 new class clowns during winter semester. Students involved over the two-semester pilot project help plan their activities, keep a journal and write a reflective paper, Ivory said.

But their take-away goes beyond tests and grades.

Darrough AKA Yakki, said he would leave the class with a sense of humility from seeing what happiness being a clown brought to the faces of people he met.

Ketzler, AKA Daisy, said that looking in the delighted eyes of children taught her to be “present in the moment.’’

Newman, AKA Sunshine, relished interactions with children and elderly people.

“I learned that people just want someone to pay attention to them and interact at any level,’’ she said.