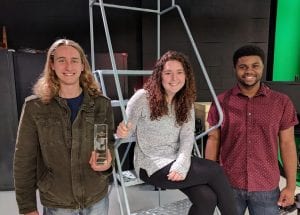 This year a record 10 Mott Community College Media Arts & Entertainment Technology (MAET) students, representing four films, were nominated. Tyler Hartwig, Allyssa Murphy, and Dontavias Smith won First Place in the category of Long Form – Fiction Film for their student film Brothers. The trio made the movie in the summer of 2016, while enrolled in MCC’s advanced course in Cinema Production. Hartwig served as director, Murphy as assistant director, and Smith as cinematographer. They are the first students from MCC’s MAET program to win a First Place award. “The award was an unexpected honor and I’m grateful for everyone who made it all possible,” said Hartwig.

“I am really proud of the students’ work and how hard they pushed themselves this year,” said Dave Rembiesa, Associate Professor and coordinator of MCC’s MAET program.

The nominated films can be found on the YouTube page for MCC’s Media Arts program titled “MAET Studios.” — G.G.