McDonald in running for Miss Basketball 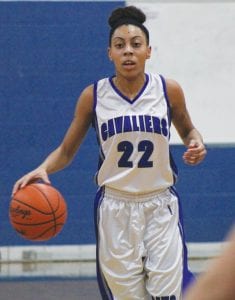 Sydnee McDonald is averaging 24 points a game for the Lady Cavs.

FLINT TWP. – Sydnee McDonald has played herself into contention for the Miss Basketball Award.

The Carman-Ainsworth senior is a candidate for the annual award sponsored by the Detroit Free Press and voted on by the Basketball Coaches Association of Michigan. The honor goes to the top senior player in the state, and the winner will be announced on Monday, March 16, the week of the girls’ state tournament finals.

McDonald, a 5-foot-9 guard/forward, has been on a scoring tear since transferring to Carman-Ainsworth from Flint Hamady in her junior year. She played the last half of last season and became the Lady Cavs’ leading scorer.

This year she is averaging 24.0 points per game, helping Carman-Ainsworth to an 11-8 record going into tonight’s regular-season finale against Midland. She opened the season with 38 points against Grand Blanc and has been in the 30’s twice more, including last Friday’s 35-point performance at Davison.

McDonald is one of two area players in contention for the award, joining Tania Davis of Goodrich.