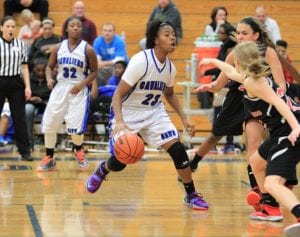 FLINT TWP. — Sydnee McDonald hit the floor running in her first full season with the Carman-Ainsworth girls’ basketball team, scoring 38 points Tuesday night to lead the Cavaliers to a

66-47 win over Grand Blanc in the season opener for both teams.

McDonald transferred in from Hamady as a junior last year and wasn’t eligible to play until the second semester, but she quickly became the

She re-established herself in that role Tuesday, scoring 25 points in the first half. McDonald also had seven rebounds, five steals and two blocked shots.

Belill his first win as a varsity head coach. The 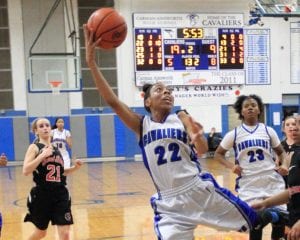 Carman-Ainsworth’s Sydnee McDonald (22) drives to the hoop against Grand Blanc in Tuesday’s game.

Carman-Ainsworth will host Swartz Creek in another non-league game tonight, then visit Goodrich on Monday.