McLaren first hospital in region to use ‘world’s smallest pacemaker’ 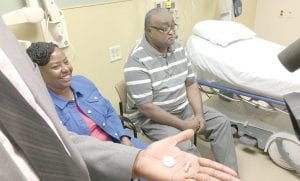 Electrophysiologist Mustafa Hassan demonstrates the miniscule size of the new pacemaker by holding it next to a quarter. Michael Johnson [L] and his wife Tamithia were the first to experience the success of the Medtronic Micra.

FLINT — McLaren Flint is the first hospital in Genesee County to use the FDA-approved Medtronic Micra, the world’s smallest pacemaker, which is about one-tenth the size of the standard model used in practice for decades.

The pacemaker uses no leads and is approximately to the size of a large vitamin. It is implanted into the heart chamber via a catheter. It is an especially useful tool for patients who have bradycardia, defined as a condition characterized by an aberrantly slow heart rate.

Michael Johnson, the first to receive the Micra, is one such patient. When Johnson’s heart stopped for 30 seconds while sleeping at the hospital, Electrophysiologist Mustafa Hassan decided to use a different access point than for the new pacemaker to not cause any interference with his dialysis treatment.

Johnson did not know he needed a pacemaker until a few weeks before the operation. Tamithia, his wife, was also unaware of Johnson’s situation and the newness of the operation and device. It had been approved for just six months.

The pacemaker has been deemed MRI safe for both 1.5 and 3 Tesla full-body MRI scans. The procedure to implant the device takes around an hour and a half.

“Before I got [the Micra] I was always tired,” said Johnson, a Sunday school teacher. “There were some warning signs.”

Hassan said McLaren is planning on using pacemaker for others in Johnson’s predicament.

“It challenges all conventions of the pacemaker over the last 50 years,” said Hassan.