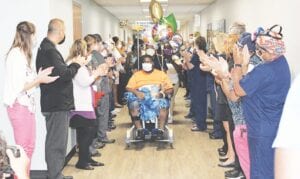 Terrell Harris received a “clap out” from staff at McLaren Flint, July 9, after spending nearly 15 weeks in the hospital recovering from COVID-19. Photo provided

FLINT — Staff at McLaren Flint honored Terrell Harris, 26 of Flint, when he was discharged from the hospital, July 9.

Harris was admitted to McLaren Flint on March 28 when he tested positive for COVID-19. Over the course of the past 15 weeks, Harris spent time in the hospital’s ICU, on 9 South, in Select Specialty Care and the Inpatient Rehabilitation unit on 4 North.

He received a “clap out” from staff this afternoon. On hand will be many of the caregivers he has encountered along the way. Harris’ outgoing personality and “never- give-up-spirit” have been inspiring to staff, several of which have a special bond with him.

“I’d like to thank the healthcare workers at McLaren Flint for always lifting my spirits, motivating me and praying for me,” said Terrell Harris. “They were always there for me when I was down, including those times when I thought I wasn’t making progress. They would remind me how sick I was and the things I was able to do at the time and I would get encouraged to keep trying. I love the staff, everyone has been so good to me.”

Initially, Terrell spent 34 days on a ventilator which meant he required a feeding tube. The virus also affected his kidneys and he had to have dialysis several times a week.

Over time Terrell’s condition would improve and he became a candidate for care on the Inpatient Rehabilitation unit where he has spent another 35 days. His rehab diagnosis, critical illness myopathy, caused his muscles to shrink and become extremely weak. When he arrived on this unit, he could not lift his arms or legs.

A lift was required to safely move him from the bed to a wheelchair. He received speech therapy to strengthen his swallowing and improve his memory. He worked with members of the physical and occupational therapy teams to strengthen his muscles and learn to take care of himself again.

Eventually, his tracheotomy, feeding tube and dialysis catheter were all removed. He is now able to eat anything he wants on his own and can walk 192 feet with the assistance of a walker. “Seeing someone as debilitated and weak as Terrell was when he came to the inpatient rehabilitation unit recover to the level he has, is an amazing feeling,” said Rebecca Wyatt, DO, Medical Director of Rehabilitation Services at McLaren Flint. “Celebrating his success is a true reminder for everyone who took care of him along the way that they are making a positive difference in patients’ lives.”

Terrell is a senior at UM-Flint studying Applied Psychology and is looking forward to returning to his studies this winter and continuing to get stronger every day.