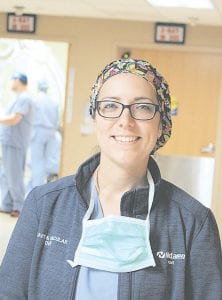 FLINT —Three months ago, registered nurse Kathryn Yombik boarded a morning flight out of Detroit, taking along her three-year-old son, niece and mother for a fun-filled vacation at Disney Land in Orlando.

Little did Yombik know that the unexpected was about to occur. As the Spirit Airlines plane was taxing on the runway, a fellow passenger began to experience a medical emergency.

“It happened really fast,” said Yombik, an RN at McLaren Flint hospital. “I just heard someone shout for help, then I turned around and saw a man slumped over in his chair five rows behind me.”

Yombik’s nursing instinct kicked, and she immediately rushed to the man’s side. A flight attendant, another nurse on board and a male passenger who was trained in CPR quickly joined her.

“At first, I thought the man might be experiencing a blood sugar issue,” Yombik said. “But it was very apparent that he wasn’t breathing or responding. There was no pulse.”

Working together, the foursome gently lifted the man, laid him on the cabin floor and took turns performing CPR. Then they used the plane’s defibrillator to shock his heart.

After one shock, the man’s pulse returned. Within minutes, EMS arrived to take him to the hospital.

Two months later, Spirit Airlines contacted Yombik and the others to inform them that the man—Jerry Drouillard— ended up having a quintuple bypass and was finally well enough to thank those who stepped up to help him.

The airline then arranged for a reunion in May between Drouillard and his rescuers.

“You could tell that he (Jerry) was a really nice man and a family guy,” Yombik said. “I’m grateful that we were there to revive him.”

Yombik said that this was the first time she’s administered CPR on a plane. She noted that the subsequent reunion with Drouillard was markedly rewarding.

“In the ER, you’re in the moment and getting a patient with CPR already in progress,” she said. “Sometimes we can revive them and ship them up to ICU. Sometimes they pass way. But we never get to see what happens afterward. It was awesome to meet Jerry in person.”

Yombik, who is currently assigned to McLaren Flint’s Cardiac Cath Lab, has been with the hospital for a little over a year. She has nine years in total experience as an RN and obtained her bachelor’s degree from Mt. Carmel College of Nursing in Ohio. She has been a native of Grand Blanc for two years.

For his part, Drouillard said he has no memory of what happened on the plane, calling the experience a true miracle. He owns a used car dealership in Royal Oak, as well as a chain of auto service centers in Metro Detroit.