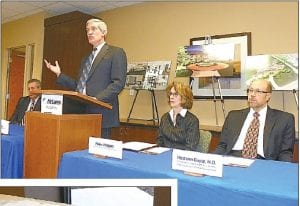 FLINT TWP. — A fundraising campaign kicked off last week with a goal to raise $8 million to build a Hospitality House on Beecher Road that will provide a home away from home for cancer patients coming for treatment at McLaren’s new Proton Therapy Center.

The housing facility is needed to compete with nine other Proton Centers nationwide, said Don Kooy, president and CEO of McLaren Flint, at a press conference.

McLaren’s $65 million Proton Therapy Center, slated to open in December, will be the first in Michigan, 10th in the nation and one of only 35 in the world.

Proton Therapy is an advanced form of precision radiation treatment that targets the site, is more effective than Xray radiation and lessens or eliminates typical side effects such as hair loss and also reduces risks of a second malignancy by more than half, according to Hesham Gayar, M.D., a radiation oncologist and medical director of McLaren’s Proton Therapy Center.

Don Kooy, president and CEO of McLaren Flint, talks at a press conference about plans to build a Hospitality House in Flint Township to serve cancer patients being treated at the Proton Therapy Center next door. A model of what the McLaren-Flint Hospitality House on Beecher Road will look like when completed (left).

Patients are expected to come from surrounding states and Canada as well as further afield. About 50 percent of Proton Therapy Center patient lives more than two hours away, Kooy said.

“The average patient might come five days a week for six to nine weeks,” he said. “ If they live a long ways away, they need a place to stay. They can’t drive back and forth every day.”

Insurance covers the cost of the treatment but not lodging. A stay at the Hospitality House, which is next door to the Proton Therapy Center, will cost $30 to $50 a day compared to staying at an area hotel that could cost two or three times more and be 15 minutes away, he said.

Equally important is providing patients with a quality of life during their stay. Kooy noted that prospective patients are otherwise normal and active and will need things to do outside of treatment.

“We only need them about an hour a day from the time they walk in the door (for treatment) until they walk out, so … it is very important to have a place that they like to stay those other 23 hours a day and have things to do,” Kooy said.

During colder months, instead of coming to Flint, patients might choose to go for treatment at a center in a warmer climate such as Florida or Texas where they can golf and pursue other outside entertainment, Kooy said.

McLaren has formed partnerships with the Genesee County Regional Chamber of Commerce and Central Michigan University’s Hospitality Services Administration Program to help provide things for Hospitality House visitors to do.

Groundbreaking for the state-of-the art Hospitality House is expected to begin in the spring.

The 40,000-square-foot facility will have 30 guest rooms with amenities such as a private bathroom, flat-screen television, internet access, a small refrigerator and telephone with personalized voice mail. It also will offer a fully equipped kitchen for guests who want to prepare their own meals, a dining room, library, exercise facility, laundry room, large gathering room; an activities room for specialized therapy, art, yoga, massage and other services; a deck and patio for outdoor activities and a parking areas for four to five Recreational Vehicles.

“We refer to it as a world-class patient experience to go with world-class technology,’’ Kooy said.

The House will have 15 to 20 full-time employees and support services provided by CMU students.

For years, McLaren has dabbled with the idea of providing housing for out-of-town guests so rooms at the Hospitality House will also be available to family members of patients coming for treatment at the medical center, Kooy said.