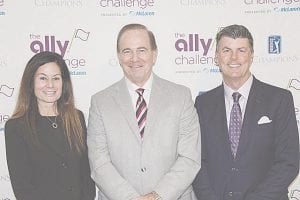 GRAND BLANC – During a press conference on Monday morning at McLaren Health Care’s new headquarters in Grand Blanc, officials announced a number of developments in the inaugural Ally Challenge, a PGA Tour Champions event coming to Warwick Hills Golf & Country Club in Sept. of 2018. It was announced that a three-year deal will position McLaren as the presenting sponsor of the event.

“First and foremost, we are thrilled to partner with an event that will have such a positive impact on Genesee County,” said Philip Incarnati, McLaren Health Care’s President and CEO. “The Ally Challenge presented by McLaren will provide a tremendous platform to align our brand with what we know will be the premier sporting event in southeast Michigan.”

The PGA Tour Champions event is set to include a roster of big names from the professional golf world, and will offer a staggering $2 million-purse to the winner of the 54-hole tournament.

Along with the news that McLaren Health Care will be sponsoring the tournament, Ally Financial’s Chief Marketing and Public Relations Officer Andrea Riley announced that the Grammy Award-winning country music duo Big & Rich is set to headline the Ally Challenge Community Concert at Warwick. The concert, scheduled for Friday, Sept. 14 next year, will follow the completion of the first round of play during the weeklong tournament.

“The Big & Rich concert will be one of the highlights of the tournament and is an illustration of our desire to build a week-long celebration of world class golf, entertainment and charitable giving,” said Riley. “The economic activity this tournament has the potential to generate and the donations it will leave behind, thanks to sponsors like McLaren Health Care and events like the Community Concert, are sure to have a lasting impact on this community and the great state of Michigan.”

Tournament officials also revealed Monday that tickets to the event are now on sale to the public at www.theallychallenge.com. Two types of season tickets are currently available: a Clubhouse Ticket as well as a Grounds Ticket. Daily tickets are also offered. Both Season Ticket options and the Friday Daily Ticket will include admission to the Big & Rich concert. Admission gates will open beginning Thursday, Sept. 13 through Sunday, Sept. 16, 2018.

“Community and corporate support for the Ally Challenge presented by McLaren has been tremendous since we announced the return of professional golf to Warwick Hills in August,” said tournament director Chris Coffman. “We could not be more excited to welcome McLaren to our sponsor roster and add the Big & Rich concert to our schedule of events on the same day that we launch ticket sales for this marquee PGA Tour Champions event. Warwick Hills is definitely going to be the place to be next September.”