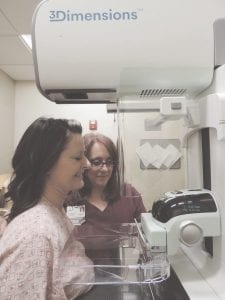 FLINT — It does not take a genius to figure out many things in life, but it definitely takes a Genius 3D Mammography for earlier and better detection of breast cancer.

The new Genius 3D Mammography System, recently installed at the McLaren Imaging Center, 301 S. Ballenger Hwy., is the first offered in this region and is FDA-approved as superior for women with dense breasts. It is called the most accurate exam available and detects cancer earlier than traditional 2D units.

Julie Forbush of Swartz Creek met all of the criteria for having the 3-D exam — family history of breast cancer, dense breasts, over age 40 and has had to be called back for a follow-up exam after having a 2D exam.

Returning for her routine six-month check-up last week, she was excited to have the option of a 3D exam.

“I feel so much better now because I know they got the best image they could get,” said Forbush whose mother was diagnosed with breast cancer last June but is now fully recovered. 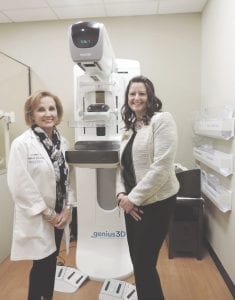 Linda Lawrence, radiologist, (left) and Julie Forbush, patients, are both thrilled by the advantages offered by the new 3D breast scanner.

The 3D process was painless and no different from the traditional 2D exam except for the use of the Genius imaging technology, Forbush said.

“I would highly recommend it,” she said. “It gives the doctors such a better picture. If there is something in there, they are going to see it. You have a better chance of being detected.”

3D imaging differs from 2D imagery in that it takes 15 images of breast tissue that can be subdivided into many layers, said Amy Vincent, quality coordinator for radiology and one of five McLaren mammogram technicians trained to use the Genius. This image layering allows the radiologist to zero in for a closer look at suspicious spots instead of viewing one flat image that, previously, could result in a patient having to be called back in for additional testing.

“This machine increases detection by 20 to 65 percent and reduces the callback rate by 40 percent,” Vincent said.

2D mammograms are still being offered but more insurances are now covering the 3D option.

” We have been waiting to get this for several years and so the foundation approved the money at the beginning of the year and we are just thrilled to get this machine,” said Linda Lawrence, board certified radiologist and medical director of the McLaren Imaging Center.

“With this 3D technology, we can see breast tissue much more clearly and detect cancers that are much smaller and at an earlier stage. Earlier detection of breast cancer means greater survival rates for patients.”

The Genius exam takes less than a minute longer than a 2D scan and its radiation level is under FDA limits and deemed very safe, she added.

In conventional 2D mammography, overlapping tissue is a leading reason why small breast cancers may be missed and normal tissue may appear abnormal, leading to unnecessary callbacks.

Breast cancer is the second leading cause of cancer death among women, exceeded only by lung cancer. Statistics indicate that one in eight women will develop breast cancer in her lifetime. The stage at which breast cancer is detected influences a woman’s chance of survival. If detected early, the five-year survival rate is 98 percent.

To enhance patient services, McLaren Imaging Center also has introduced a scheduling program called InQuicker, which enables patients, after receiving a physician’s referral, to conveniently schedule mammogram appointments online at www.mclaren.org/flintbreastcenter using a computer, tablet or smart phone. Appointments also can be scheduled by calling the McLaren Imaging Center at 810-342- 4800.