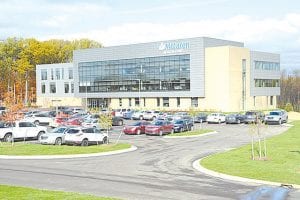 A look at the exterior and interior of the new McLaren Corporate Headquarters in Grand Blanc.

As McLaren has grown, many key system level, executive and administrative offices were spread across numerous facilities in different communities. Dan Medrano, McLaren’s Corporate Director of Facilities, noted “such scattering of our talents and functions added inefficiency and cost. Further, we were missing out on the chemistry gained when talented people working on their own important projects come into regular contact and can share ideas and build synergy.”

The new McLaren Health Care Corporate Headquarters, which opened October 30, 2017, at One McLaren Parkway in Grand Blanc, is designed to reflect the corporation’s strength, vitality, progressive thinking and vision. The three-story facility houses 178 corporate employees, with capacity for 229.

“We wanted to bring our leadership and team together in one location,” said Medrano. “The design of the offices brings new thinking to how people interact and collaborate.”

The new headquarters’ layout acts as an element in making McLaren’s strategic plan a reality, stressing interaction, continuous learning, and healthy lifestyles. Light infuses all aspects of the building, from the expansive views of nature and woodlands surrounding the campus to the walls of windows framing the entire structure. There are meeting rooms for both large and small groups, a training center on the first level, and the latest AV, IT and data equipment for webinars, meetings and communications. By design, there are also many small gathering areas to nurture informal, faceto face chats.

Recognizing that the headquarters of a major health care system should also support the “health” aspect of its name, the new Corporate Headquarters offers an onsite café with healthy food choices, an employee gym, and outside walking paths.

“We searched for two years seeking a location in our traditional base of Genesee County before finding the perfect site on 23 acres in Grand Blanc at the intersection of Holly Road and I-75,” Medrano noted… He explained that 13 of these acres are being preserved as a conservation area, but “there is still space for a potential second building” down the road if needed.