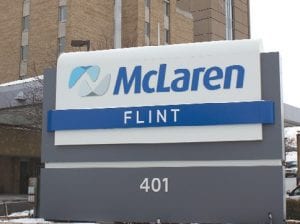 The new sign in front of McLaren Hospital, at 401 Ballenger Hwy., reflects the name change for the health care provider.

FLINT — McLaren Regional Medical Center is announcing a new name for the hospital that strengthens its position at the heart of one Michigan’s largest and fastest growing health care families, McLaren Health Care.

The rebranding initiative is part of McLaren Health Care’s strategic plan to enable it to have a single identity that reflects the scope and impact of the organization across the state.

All McLaren subsidiaries and facilities bear the McLaren name.

“McLaren-Flint has proudly borne the name McLaren for more than 60 years, starting when McLaren General Hospital opened here in 1951,” said Don Kooy, president and CEO of McLaren-Flint. “Over time, the name McLaren has become synonymous with quality care, skilled and compassionate staff and physicians, advanced technolo- gy and treatment and community benefit. We are proud that the name that has served us so well is now being extended to McLaren facilities across the state.”

Kooy said while the name is slightly different, patients at McLaren-Flint will get the same great care they’ve come to expect. He added the Flint orientation in the name is more than just a geographic indicator. It is symbolic of the medical center’s commitment to the greater Flint and Genesee County community as well as its position at the heart of the McLaren Health Care system, whose corporate headquarters are also in Flint.

“As one of the largest health care systems in Michigan, McLaren is able to provide people with greater access to high-quality medical care, including lifesaving clinical trials, and the latest, most advanced technology,” said Philip A. Incarnati, President and CEO of McLaren Health Care. “It’s a testament of our commitment to make individuals healthier and communities stronger.”

Along with the name change, the logo identity has been redesigned. Care was taken to maintain the basic color of McLaren’s logo to retain its brand equity as a strong and stable health care services provider. The new logo, however, better expresses McLaren’s strong momentum and forward-thinking principles. The “dual infinity” icons, critical elements of the new logo, represent McLaren’s balance of serious medicine and compassionate care, along with, of course, its endless possibilities.

The initiative was announced internally in late fall 2011 after conducting focus group sessions among consumers across the state to investigate how a potential name change might be perceived. There was an immediate positive reaction.

“We were amazed by the amount of positive feedback we received,” said Kevin Tompkins, vice president of marketing for McLaren Health Care.