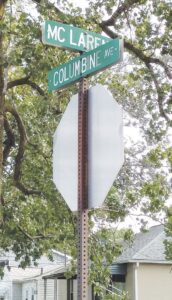 what we’re going to do with local streets, and now all of a sudden this particular section of resurfacing, from Columbine to Fern, on McLaren, now all of a sudden it shows up in conjunction with a major street that we’re trying to do,” said Martinbianco. “So, I just want to know how that got in there, how that happened? To me this makes

BURTON — The city council approved a pavement preservation contract, which includes the milling and resurfacing of Center Road, from Atherton to Maple road, but councilmembers decided to remove McLaren Street from the $770,242 project.

Council voted 3-2 to remove McLaren Street, from Columbine to Fern street, from the project before unanimously approving the rest of the Center Road resurfacing.

Councilman Vaughn Smith and Council Vice President Greg Fenner were the only votes to keep McLaren in the project. Councilwoman Deb Walton and Councilman Danny Wells were absent from the Aug. 2 meeting.

The issue of why McLaren Street was a part of the project arose after Councilman Tom Martinbianco said he didn’t think the street had anything to do with a major road like Center Road and should be removed from the contract for milling and repaving with ACE Saginaw Paving Co. of Flint.

“One thing that really bothers me about this is that we talked about at budget meetings…about no sense.”

Charles Abbey, director of the Burton Department of Public Works, said engineers recommended adding it into the Center Road project because it would require milling and resurfacing, like Center Road.

He said the city looks at roads and makes fixes based on what each road needs. Because there would be milling and resurfacing equipment brought in to do Center Road, which makes up the bulk of the cost of the project, it was determined to be more cost effective to throw McLaren into the project so the same equipment would not have to be brought in at a later time to perform the resurfacing.

“We’ve got that in there because it’s part of a mill and fill,” said Abbey. “They’ve already got that milling machine here. If you brought them back later to do that road by itself you’ll pay three times that amount.”

Martinbianco said he did not think that was true, questioning why there would be cost savings in taking the equipment from the Center Road project and moving it many blocks away to mill and resurface McLaren Street.

“Now don’t tell me they’re going to take road stuff and road equipment from Center Road and go all the way over to McLaren and do that,” he said. “That’s not happening, that makes no sense.”

Abbey said it does make sense because the equipment is being brought in from Saginaw, so while it is already here for the Center Road project it can more cost effectively travel six blocks down the road to accommodate the McLaren Street project at about one-tenth of what it would cost to just bring the equipment back at some point in the future to do McLaren Street.

Martinbianco further questioned why McLaren was selected and not another street in another subdivision. He went on to ask if removing McLaren Street from the project would mean the project needed to be re-bid or if there would be other legal ramifications.

Attorney Amanda Doyle said she didn’t know what original bidding document said so she could not provide an answer at that time.

Abbey clarified that the project was bid on a unit price, so the removal of McLaren Street would end up reducing the cost by $30,000.

“So, I just want to be clear here, so we have a clear direction,” said Abbey. “Are you saying we’re not going to do that road? Because that’s the last one in that whole section. I don’t know what you think went on here, but we were starting to go from Maple Road all the way through that section. We were targeting one area first, and then the next area …every road in sequence. So, are we going to skip something and just leave those that need repairs?”

Martinbianco questioned why Columbine or Barnes weren’t considered before McLaren, which he said is in much better condition. Abbey explained both streets would be done eventually but required more work than McLaren Street to bring them back to an acceptable level.

Councilman Vaughn Smith said he understood why McLaren Street was tacked on with Center Road, comparing it to the practice of “bundling” in which a vendor provides a product or service at a fixed cost and then adds to it to include more at that fixed price.

“Look up the term bundling, you’ll see what it means, and it works very well,” he said. “That’s the cost per unit if you want to look at it that way and reading this contract that’s what they’re doing. I get what you’re saying, Tom, but how the residents will benefit from this is they won’t have to pay for that additional transportation cost in addition to a person having to come back in.”

Smith further expressed concerns that the council could lose two weeks if they have to rebid it and questioned who would benefit from that?

“The residents don’t benefit from that. Because they’re going to have old streets that are getting older,” he said. “Slap them (the administration) on their hands, tell them don’t do that again and let’s take care of this action.”

Abbey said the administration and council had discussed the practice of keeping road work in one area of the city at a time and doing as much work as could be done to save money, calling it a way to get the “biggest bang “ for the city’s money. He cited other subdivisions where they lumped projects all together to maximize city dollars.

“We have been targeting these based on the engineers, not because of who we want or why,” said Abbey. “That overlay there is just a slight mill just to get it down where you don’t have those big cervices. Thin overlay. Not a reconstruction like you see on the main roads where we mill off three inches and lay down three inches.

Abbey explained with unit pricing the city has always done road work so whenever other roads can be added to a project at a fraction of the cost, they are often tacked on.

“If you want to go in a different direction, then we need a clear direction of what you want to do,” he said.

Martinbianco said he thought there was a clear indication of what the council was going to do during the budget process He said they were going to have a get-together and talk about the problems with local streets. During those discussions he said he never heard McLaren mentioned once.

“Center is a major road – McLaren is far off the radar,” he said. “So, I’ll stand with regard to what I said about taking that out.”

With McLaren Street removed from the project, the council unanimously approved the Center Road milling and resurfacing. If the contract needs to be rebid, the council will discuss it at its Aug. 16 regular meeting.