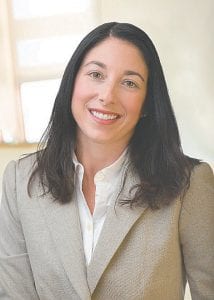 FLINT – Deidra A. Wilson, MPH, vice president of government relations for McLaren Health Care Corporation, has been named to the prestigious 40 Under 40 list by Crain’s Detroit Business.

The honorees were selected by Crain’s editorial team from nominations based on their impact and achievements in business and to represent a diversity of sectors and backgrounds.

In her position at McLaren, Wilson oversees government affairs for the system and its 19 subsidiaries. She has established operations for advocacy at the state and federal levels, oversees a political action committee and manages grant writing. Wilson cultivates positive relationships with legislators, policymakers, other industry leaders and the public for the purpose of contributing to sound health care policies.

“In her first two years at McLaren she has already built a strong and dynamic culture of open communication in our governmental interactions. We look forward to her continued leadership and congratulate her on this recognition.”

Before joining McLaren, Wilson spent 11 years at Blue Cross Blue Shield of Michigan where she attained the position of director of state government relations and was a senior member of the organization’s government affairs management team.

Prior to that she was senior health policy advisor in the Michigan State Majority Policy Office. Wilson also completed a federal government affairs graduate student fellowship with the Michigan State Medical Society and served as a legislative associate for former U.S. Rep. Joe Knollenberg in Washington, D.C.

“Working on behalf of the thousands of people at McLaren and the many patients it serves is an incredible opportunity,” said Wilson. “The McLaren system spans the state so I endeavor to establish and maintain relationships with federal and state legislators across Michigan. It is an honor to collaborate and help build consensus for improved health care policy for all Michiganders.”

Wilson holds a master of public health from the University of Michigan and a bachelor’s degree in political theory and constitutional democracy from Michigan State University’s James Madison College. She lives in Okemos with her husband and young son.