Progress on a Hospitality House in Flint Township that is being built to give cancer patients and their families a nice place to stay while being treated at the PTC next door.

FLINT TWP. —Pencil beam scanning — an advanced, precise form of cancer radiation treatment – will be one of only four of its kind available in the world when McLaren Medical Center’s new Proton Therapy Center (PTC) opens this summer, said Hesham Gayar, M.D., chairman of the Department of Radiation Oncology and PTC director.

Showing before- and after-treatment slides of brain, prostate, lung, spinal and other difficult to treat tumors in children and adults, Gayar demonstrated how standard radiation impacts surrounding normal tissues while proton radiation can be directed within millimeters of the tumor site with no exit radiation or impact on normal tissue and thus fewer, if any, side effects.

For example, a standard radiation dose to treat a spinal tumor affects everything in front of the spine – stomach, reproductive organs, liver, food pipe, etc., he said. With proton therapy, the treatment stops precisely at the targeted site with no impact on the organs and tissues beyond. 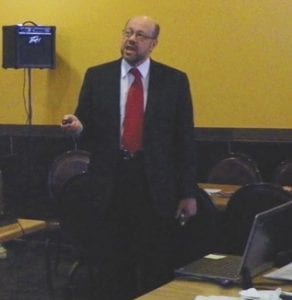 Hesham Gayar, M.D., chairman of the Department of Radiation Oncology at McLaren Medical Center speaks to the West Flint Business Association about dramatic improvement in local cancer treatment coming with the opening of the state-of-the -art Proton Therapy Center.

“The ideal goal of radiation is to give maximum dose at the tumor and avoid radiation to normal tissue,” Gayar said, calling proton therapy beautiful for doing exactly that.

Insurance covers most kinds of proton treatment, based on location, and is increasing as technology improves, he said.

Proton therapy has been around since the 1930s but was very expensive to use, Gayar said. Creation of proton centers began trending up in the 1990s and today there are 34 in operation worldwide including 10 in the United States.

McLaren’s PTC will be the eleventh in the U.S. and one of three offering the more precise pencil beam therapy, Gayar said, who explained how it differs from scattered beam proton therapy also in use.

McLaren’s PTC, which cost about $75 million to build, will also have the world’s first robotic arm that suspends from the ceiling and comes down around a patient for before and after scans to achieve ideal positioning for treatment similar to the way a hunter looks through the telescope of a gun before pulling the trigger, he said.

Gayar said August is now the targeted opening date for the center which has been under construction for nearly three years. A goal to have it up and running this month was pushed back due to regulatory issues, he said.

Gayar also mentioned a Hospitality House under construction next door to the PTC that is being built to house outof town patients who may stay six to nine weeks during treatment. It is located in Flint Township and will have 20-30 guest guests rooms with added amenities. Construction is expected to be completed in June or July to coincide with the targeted opening date of the PTC, he said.

The PTC and Hospitality House both are expected to bring new jobs to the area and boost the local economy through what visitors spend on food and entertainment, Gayar said.

He also said it will be a shot in the arm for McLaren to retain cancer patients who previously left town for treatment at advanced facilities as well as attract patients from neighboring states and Canada which currently do not have PTCs.

Gayar also took the opportunity to introduce his own invention – a skin cancer treating applicator that he has been using for about two years but just patented two weeks ago.

“With this invention, we can treat cancer in just seven visits instead of five and six weeks with outstanding cosmetic results (no scars),” he said, adding that it is cheaper than most surgery and standard radiation.