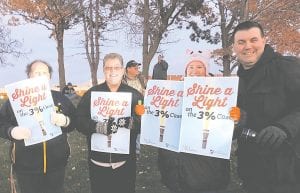 About 125 members from MEA Region 10 in Genesee and Lapeer counties attended a flashlight vigil last week to bring public awareness to their ongoing lawsuit against the State of Michigan.

FLINT TWP. — On Wednesday, Nov. 8, the Michigan Supreme Court heard oral arguments in AFT Michigan et al vs. State of Michigan — the long-running 3 percent case is brought by the American Federation of Teachers of Michigan and the Michigan Education Association on behalf of education employees who had money wrongfully withheld from their paychecks in 2010-2012, according to press release.

On Tuesday, Nov. 7, the evening prior to the hearing, education employees across the state gathered for Flashlight Vigils to “Shine a Light” on the case and the faces of educators who are owed more than $550 million taken 7 years ago to fund retirement. That money is sitting in an escrow account awaiting the outcome of this case. The law behind this withholding – PA 75 of 2010 – has been ruled unconstitutional at every step of the judicial process so far. The state has unsuccessfully appealed the case each time.

To draw attention to the ongoing legal battle, MEA and AFT Michigan worked jointly to host flashlight vigils in Lansing and 10 other communities across the state on the eve of the state Supreme Court hearing. 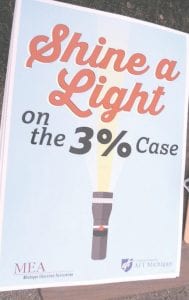 About 125 educators from Genesee and Lapeer counties attended the vigil in Flint Township, held on Linden Road on the west side of Genesee Valley Center mall.

Similar to a demonstration held in August 2016 at the mall, the demonstrators gathered along the sidewalk and paraded around in a circle chanting and drawing supporting honks from passing cars.

So the case has returned to the Supreme Court.

A decision is expected to be handed own some time in 2018, said Frank Burger, president of the Carman-Ainsworth Education Association and MEA Region 10 president.

Karen Christian, president of the United Teacher of Flint, said she watched the court hearing an thought the Justices asked great questions.