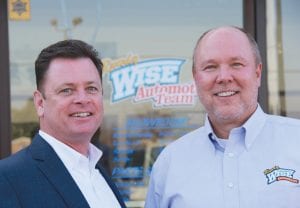 CLIO – Customers at Randy Wise Chrysler Dodge Jeep Ram in Clio can rest assured that their car-buying experience will be stress-free with the dealership’s new general manager Tim Hall, who makes it a point to take care of his customers and incorporate personalized service into each sale.

Hall, 49, of Fenton, has been selling cars since 1988 when he followed his brothers into what became a family business. Since he started out, he’s worked at dealerships from Illinois to Midland, to Fenton, all Chrysler stores, and has steadily bolstered his skills and his resume, amassing significant and valuable experience in the industry.

In 2005, Hall began working with his brother in his hometown of Fenton. The brothers worked together for more than ten years, with Hall serving as the general sales manager and general manager of the Chrysler dealership. Earlier this year, after Jim Hall chose to sell the business, Hall was back on the market as a free agent, and was led to the Randy Wise auto family by what he considers an act of fate or divinity.

“I really do think it was, well, whatever you want to call it, but it was kind of meant to be,” said Hall. “I met Chris Wise and really felt like I’d known him my whole life, then I met Randy and it was unbelievable. These guys were just awesome. They’re real people. They’re all about family and taking care of people.” Hall, a family man himself, married with two children, valued Chris and Randy Wise’s business philosophy, which is based on family and caring for employees and customers. A number of staff members at the Clio location have been there for over 20 years, yielding virtually no turnover. “You just don’t hear about that, no turnover, it’s such a breath of fresh air,” said Hall.

After three months on the job, the dealership has continued to meet or exceed sales quotas and has seen a number of loyal customers follow Hall from Fenton and Grand Blanc to his new home at Randy Wise Chrysler Dodge Jeep Ram in Clio. He remains as hopeful as the day he started, saying that it “just feels right.”

DURAND – For more than 25 years, J.R. Davidson owned and operated Clio Chrysler on Vienna Road. Then, in 2013, when he saw an opportunity to take a few years off, he grabbed it, selling his business to Randy Wise. Now, three years later, he’s back in business with Chris and Randy Wise, managing Randy Wise Chrysler Dodge Jeep in Durand.

“It’s a little confusing,” Davidson laughed as he explained his relationship with the Wise family. “But I stayed involved in the automotive industry, then Chris and Randy approached me last year, wanting to expand their portfolio. They were looking to purchase a dealership on the I-69 Corridor and we found a great opportunity in Durand.”

Davidson, 54, says that he initially served as a broker, just looking to help find a suitable dealership for the Wise’, but he was soon offered the job of general manager at their new location. He accepted, and since opening in February of this year, Davidson says he’s been enjoying his venture back into auto sales and the store has been consistently performing at or above their expectations.

“It wasn’t really my intention to run the store when we found it, but after talking with Chris and Randy and discussing the goal of building a new facility by the expressway, I was in,” said Davidson. “We’ve purchased property nearby and we’re planning to expand. We’re looking to start building sometime next year.”

Starting out at 17 years old, Davidson has been in the industry for nearly four decades, and brings with him a wealth of experience that he’s carried on as a sort of family tradition, with his father and brothers also working in the auto business.

Davidson holds family in high regard as a husband and father of three, and conducts business with family in mind. He says his goal is to be Durand’s hometown dealer, building “a good team of good people” and making his customers feel at home.

“Family is important to me and it’s the same with Chris and Randy,” said Davidson. “They really promote a family atmosphere here, and that makes a great work environment.”