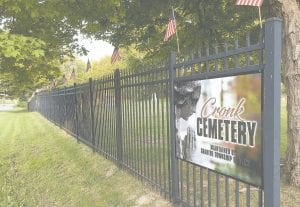 Rows of American flags waving from fence posts at two township cemeteries over the Memorial Day weekend were the handiwork of Township Clerk Kathy Funk and her husband Doug. She was inspired to install the tributes during a visit to Linden last year where she saw the cemetery there decorated for Memorial Day.

“I decided it would be nice to do the same (here) as a reminder that Memorial Day isn’t about cook-outs and the kick-off to the summer season,” she said. Cronk Cemetery is on Beecher Road and Bristol Road Cemetery is out near the airport.

As township clerk, Funk is in charge of the cemeteries but she also had a personal motivation. Her father and her husband’s father both served in the Korean War. Her brother is a retired fighter pilot for the United States Air Force and a nephew served in the Marines. All returned home safely but Funk is mindful that not every family can say that. Spending a few hours of their time posting the flags was a small price to pay for the sacrifice of those who did not return home, she said. Memorial Day has been observed since May 1868 – 150 years- and continues to be a holiday to honor American soldiers who died in wars. The flags serve as a solemn reminder of the true meaning of Memorial Day.

“Our two cemeteries are steeped in township history, as well as military history,” Funk said, noting that a soldier buried at Cronk Cemetery died in the Battle of Bull Run during the Civil War.