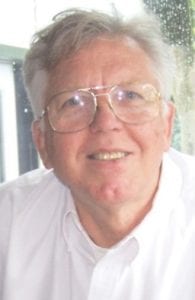 FLINT TWP. – Every spring for nearly a decade, beautification advocates have turned out for Join Hands Day, a clean-up, spruce-up group project at Flint Township Park, spearheaded by Dr. Peter Mikelens, who could be counted on to know the names of every plant species and to give direction on what should stay and what needed to go.

This year the effort was renamed Youth Action Day but still followed the format to plant flowers, pull weeds, cut branches, pick up trash and generally make the park on Norko Drive a welcoming place to visit.

Mikelens, 70, who also was a member of the township’s Parks and Recreation Committee, died Wednesday, August 9 at McLaren Regional Medical Center- Flint. His passing was announced at the August 21 township board meeting by Supervisor Karyn Miller.

“Dr. Peter Mikelens and his spouse Millie Wint did a lot in service to the township,” Miller said. Most recently he attended the July 24 township board meeting to speak against selling a large vacant township owned parcel that had been proposed for future development as a township park.

Honoring Mikelens’ wishes, cremation has taken place but a memorial service is being planned for noon, Thursday, September 14, at Trinity Assembly of God – 4363 W. Mt. Morris Rd., in Mt. Morris. Family will receive visitors at the church on Thursday from 11 a.m. until the time of service, Contributions may be made to Catholic Charities of Genesee County – North End Soup Kitchen.

Mikelens was born June 16, 1947 in New Orleans, Louisiana to the late John and Vonda (Rebane) Mikelens. He earned his Ph.D. in Microbiology from the University of California – San Francisco and resided in Berkeley, California before moving to Flint to start his residency at McLaren Regional Medical Center.

Mikelens later did his Oncology Fellowship at Wayne State University. He was employed with a Locum Tenens Company in Atlanta, Georgia for many years.

Mikelens also was a member of the Greater Flint Area Arbor of the Gleaner Life Insurance Society, which provided financial support for the park clean-up effort.

Survivors include his wife, Mildred Wint of and brothers: John and Mark Mikelens. Share condolences with the family online at www.oguinnfh.com