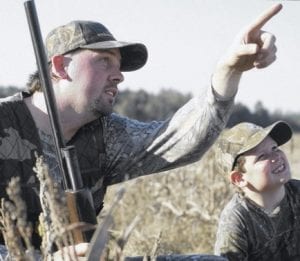 Kids under the age of 10 can now hunt with a mentor.

GENESEE COUNTY— At long last, Michigan has finally taken the final step to opening up hunting and fishing to its youngest residents. The National Resources Council approved a new Mentored Youth Hunting Program at its February meeting. The emphasis of the new program is to introduce and encourage kids under the age of 10 to take up hunting and fishing activities. The new hunt season begins as part of the 2012 hunting season and licenses go on sale March 1.

“The Department is fully supportive of this new program that will help introduce children to the sport of hunting, ensuring that we successfully pass along Michigan’s rich outdoor traditions,” aid Rodney Stokes, director of the Dept. of Natural Resources. “We wish to thank our many conservation partners who helped develop this program with the NRC, providing a new opportunity for us to interest Michigan’s youth in hunting and fishing.”

After months of focus groups and feedback from the public and partner groups, the regulations approved by the NRC for the Mentored Youth Hunt Program include:

• all mentors must be age 21 or older, have previous hunting experience and possess a valid Michigan hunting license.

• no limit on the number of youth a mentor can have with him or her in the field, leaving it at the discretion of the mentor

• a limit of two hunting devices, bow, crossbow or firearm per mentor

• Issued deer tags under the Mentored Youth Hunt license can be used for either sex deer (antlered or anterless), are not subject to antler points regulations in certain parts of the state and can only be used on private land, consistent with current state law

• A final provision of the law allows 10- year-olds to hunt big game on private land with a firearm. This was implemented during the 2011 season.

New guides for voluntary mentors are available at www.michigan.gov/mentoredhunting, along with more detailed information about the program and its establishment.

The new license will cost $7.50 as a “package” license that includes small game, spring and fall turkey (public and private lands), two deer tags (any deer), a furbearer trapping permit and an allspecies fishing license.

Michigan has been working over the past several years to untie the restrictive laws that prohibited hunting for anyone under the age of 12. That started with the Families Afield Act signed into law by then-Governor Jennifer Granholm in July, 2011. A series of apprentice hunting laws and packages were also adopted to get hunters and anglers of all ages involved in the sports.