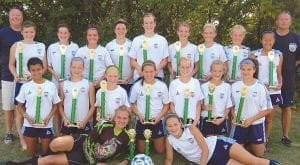 DAVISON — The U14 MESA Blitz, based out of Davison, but with players from all over Lapeer and Genesee County, won back-to-back soccer tournaments competing in the Hamburg Invitational August 18-19 and went undefeated in preliminary games, 6-1, 5-0, 6-0. In the championship game, MESA came out on top, 4-1. Two weeks later, MESA traveled to the Romeo Peachfest where it went undefeated in preliminary games, 6-0, 4-0, 9-0. In the final game, the MESA Blitz defeated the MI Legacy, 4-0, earning their second championship trophy of the season. In eight tournament games, the team scored a total of 44 goals, allowing just two. — L.P.