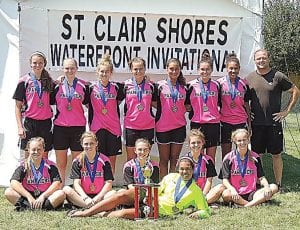 ST. CLAIR SHORES — The MESA Panthers U-19 girls’ soccer team won the title at the St. Clair Shores Waterfront Invitational on August 18. The Panthers beat the LCSC Meteors MRL from Livonia, 3-2. Alyssa Burke put the team on her back and carried them to victory, said Panther coaches. Alyssa scored both of the come-from-behind tying goals. The winning goal for the Panthers was scored by Katelyn Wilkowski assisted by Jessie Magalski. — L.P.