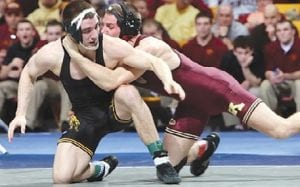 Brent Metcalf will return to Michigan to run the Chase Your Dreams Camp from Aug. 17-19 to honor his brother.

The camp was started by Metcalf’s brother, Chase, who began the camp back in 2004 along with Michigan Xtreme owner, Tom Bennett. Chase passed away in 2005 due to a car accident and Brent has come back every year to run the camp to honor his brother.

Brent has been busy over the past several months, as he finished as runner-up to Jared Frayer at the Olympic Trials in April at the University of Iowa. Recently, Metcalf had been in London training with Frayer as the Olympic alternate at 66kg.

The Chase Your Dreams Camp began with 30 kids, but now accepts up to 50 kids per camp. There will be eight total training sessions along with meals, shirts and hats for $150.

The camp is seen as a success as the original 30 campers at the 2004 camp produced 46 individual state titles.

After the camp, Metcalf will continue to train and has a eye on the World Championships next June.