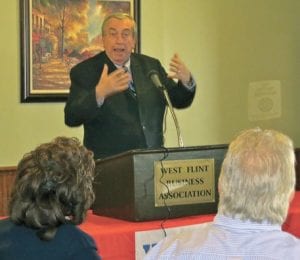 Meteorologist John McMurray talks about weather past present and future.

FLINT TWP. — Don’t believe the hype? That frank advice is from local meteorologist John McMurray who was the guest speaker last week at the monthly meeting of the West Flint Business Association.

McMurray, who has been in the business some 50 years, said the media has a tendency to overhype weather predictions.

“You don’t cover a barn raising, you cover the barn destruction. It is the psyche of the media,’’ he said. “They take simple facts and make them unbelievable.”

When those extreme forecasts prove wrong, there are no corrections made, they just move on to the next one, he said.

McMurray, who is a television meteorologist and president of Commercial Weather Services of Flint, also talked about changes in weather forecasting in the past 50 years and he answered questions about global warming and computer weather models.

During his career, technology brought one of the biggest changes in satellites and radar systems, he said.

Early satellites were not in synch with the rotation of the earth, making it a guessing game to figure out what a satellite was looking at, he said.

Modern geosynchronous satellites rotate at the same speed as the earth so they are always looking at storms definitively, he said. They can pinpoint and begin tracking potential hurricanes as they are forming off the coast of Africa. Some satellites focus on the Atlantic coast and others on the Pacific coast.

One prediction McMurray is willing to make is eventual hurricane damage on the outer banks of the Carolinas comparable to Katrina in New Orleans where warnings were ignored from civil engineers who for years had said the dams needed shoring up.

Homes are being built on Cape Hatteras which has only two bridges for evacuation, he said.

“There is going to be a time when a hurricane going up the Atlantic coast will flush everything out of sight like the (2004) Tsunami in Indonesia,’’ he said.

Michigan has Doppler radars in White Lake, Gaylord and near Grand Rapids, he said.

Still to come in the next 25 years or so will be city-sized radars mounted on telephone poles able to provide a microscopic looks at storms as they pass through, he said.

Asked to comment on Global Warming, McMurray confirmed that temperatures are definitely warming up.

Nobody in Michigan will believe it but 2014 was the warmest year globally in the past 50-75 years, he said. Michigan, on the other hand had a record cold winter and summer.