Metro League to pare down to eight schools

Flushing or Carman-Ainsworth to be voted in at August meeting 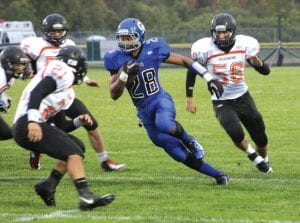 Carman-Ainsworth or Flushing will become the new eighth member of the Flint Metro League when the league takes a vote at its August meeting.

FLINT — Two final candidates have been selected for possible entry into the Flint Metro League beginning with the 2014-15 calendar year—Flint Carman- Ainsworth and Flushing.

Flint Kearsley athletic director Paul Gaudard said last Thursday that the Metro League voted to go to an eightschool alignment after Lapeer Community Schools voted to consolidate Lapeer East and Lapeer West into one high school at its June meeting. That essentially meant the loss of two schools from the Metro League. Because the new predicted enrollment for the new Lapeer High School is around 1,600, that means it will also be looking for a new league. Lapeer Community Schools Supt. Matt Wandrie reports that the search for a new league continues for the new Lapeer High School. Lapeer East and West have been members of the Metro League since 1968.

“We voted to go eight schools because losing both Lapeer East and Lapeer West put us at seven schools—Flint Kearsley, Holly, Fenton, Clio, Swartz Creek, Ortonville-Brandon and Linden,” said Gaudard. “We asked three schools to go forward and complete the application—Owosso, Carman- Ainsworth and Flushing. Owosso reported back that they were satisfied with the realignment of the Capital Area Activities Conference-Red, so we took site visits and Carman-Ainsworth and Flushing did presentations to the league in late June.”

Gaudard says a vote at the August Metro League meeting will cement the eighth team for the Metro League for the 2014-15 calendar year.

Carman-Ainsworth and Flushing just completed their first seasons in the Saginaw Valley League-South. The two former Big Nine schools joined Davison and Flint Powers in the SVL-South after the Big Nine disbanded after the completion of the spring 2011 season.

Carman-Ainsworth athletic director Bob Root noted that the SVL was not the school’s first choice.

“I’ve spent a year leading a group to start a Genesee County League and we were hoping (the Metro) would take Davison, Flushing, Carman-Ainsworth and Flint Powers,” said Root. “They said no, they just want eight schools. We understood they were happy with the 10 school alignment, so I’m not sure why they want to go to eight now.”

Root confirmed that site visits have taken place to Carman-Ainsworth and Flushing and now his school is at the mercy of others, much as it has been over the past several years.

“When the Valley accepted us (the four remaining Big Nine schools), we were a balanced league,” Root explained. “Now we are decimated again with the closure of Flint Northern and with us or Flushing pulling out, now we are down to five schools again in the South division. We’ve already been through this when the Big Nine went from nine to seven to five to four. It’s not fun competing in a five-member league.”

Roots’ larger point has mainly been lost on area schools, that of having a league consisting of local schools.

“You don’t look at who’s good in which sports, it’s community schools and kids from the area should be playing each other and creating those natural rivalries. Because of where we are now, it will be better for whoever is voted into the Metro League, but it will make our league, the Saginaw Valley-South, back to another small league.”

The problems begin to mount also, because currently girls’ and boys’ swim and hockey co-op with Flushing. League rules stipulate that no cross league teams can compete for league honors. Davison found itself in similar struggles when Kearsley joined the Metro League in 2008 because it had a co-op agreement with Kearsley for boys’ and girls’ swimming. Davison still rents Kearsley’s pool, but is now a standalone swim program, while Kearsley co-ops with Clio.

“Regardless, our co-ops will have to be re-evaluated and dissolved,” Root said. “Our middle school feeder swim program will also have to be dissolved and our swim numbers have been on the increase because of this program.”

“It’s out of our hands at this point,” Root added. “We appreciate the Valley taking us in, but the South will now be down to five schools again.”