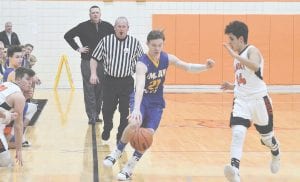 EAST LANSING – The adoption of major changes to the Michigan High School Athletic Association transfer regulation was among notable actions taken by the Representative Council during its annual Spring Meeting, May 6-7, in Gaylord, in addition to the selection of the Association’s next executive director announced in a previous release May 8.

The Spring Meeting of the 19-member legislative body of the Association’s more than 1,400 member schools is generally the busiest of its three sessions each year. The Council considered 29 committee proposals and dealt with a variety of eligibility rule, postseason tournament and operational issues.

The additions to the transfer rule received vast support from member schools in surveys leading up to the Council’s vote.

“We are hopeful this ‘sport-specific’ transfer rule will be easier to understand, and therefore, more consistently enforced,” MHSAA Executive Director John E. “Jack” Roberts said. “This rule better addresses the changing landscape of transfers, hopefully dissuading those considering moving for athletic reasons while still allowing a full range of sports for those who do switch. It may seem like a punishment to some, but the new rule is actually more permissive for many transfer students, and we saw growing support for these changes from our schools since we began discussing this proposal a year ago.”

A number of significant actions at the Spring Meeting will affect the junior high/ middle school levels, as the Council continued growing its impact among those who represent the future of educational athletics.

Another committee recommendation approved by the Council will allow a middle school student-athlete to compete in two non-school events during the school season in team sports except football – making the rule for team sports at the junior high/middle school level the same as the individual sport model currently enforced.

The Council also approved of continuing to develop and expand opportunities for the MHSAA to act as a “presenting sponsor” of already-existing junior high/ middle school meets, invitationals and tournaments conducted by leagues, conferences and schools around Michigan. Staff was authorized to approach MHSAA sport committees and sport coaches association to explore possible junior high/middle school area or sectional competitions in cross country, track & field, wrestling, swimming & diving and potentially other sports.

The Council approved a number of recommendations by respective sport committees that will alter the tournament setup beginning this fall. In ice hockey, the Pre-Regional system of tournament assignments has been eliminated; all teams will instead be organized into traditional Regionals, 24 total with no more than eight teams assigned to each. In boys’ lacrosse, a game will end when an 18-goal margin is reached any time after the completion of the third quarter; the 12-goal differential that starts a running clock during the second half will continue.

In soccer, beginning with the 2019 season, the first round of District games will be required to be played the week before the current District week on that Wednesday, Thursday or Friday. District Semifinals and Finals will be scheduled for the following week – but Saturday games can be used only as a weather backup during the District round.