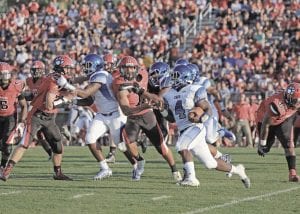 EAST LANSING – John E. “Jack” Roberts, executive director of the Michigan High School Athletic Association, said on Nov. 2 that he is “disappointed and disheartened” by the Big Ten Conference announcement that it will play and televise football games on Friday nights beginning with the 2017 season.

Friday night football remains one of the strongest and longest-standing traditions in high school athletics, and the MHSAA has fought since the start of this century to keep Friday nights sacred against the overstepping of college football and the damage televised Big Ten games are now expected to cause to attendance and media coverage of the sport at the high school level.

Roberts was contacted by both Big Ten Conference commissioner Jim Delany and Michigan State University athletic director Mark Hollis before the decision was announced. Roberts said he is appreciative of Michigan State and University of Michigan’s low tolerance to be included in this venture – at most, both will host a Thursday or Friday night game during Labor Day weekend and play one Friday night away game during the remainder of a season – but remains frustrated that similar respect for high school football was not shown by the conference as a whole.

Michigan State has played Friday night games during Labor Day weekend the last six seasons, hosting five and playing at Western Michigan University in 2015. However, most Michigan high school games continue to be scheduled and played on the Thursday before Labor Day, relieving holiday travel conflicts in most communities. University of Michigan did play on the Thursday before Labor Day at University of Utah in 2015, but has not played on a Friday night of Labor Day weekend this decade. The Wolverines are one of five Big 10 schools without a Friday night game in 2017.

“We are grateful that Michigan State University and the University of Michigan are trying to minimize the effects of this decision by the Big Ten. But overall, this is just the latest step by major college athletics in the pursuit of cash that is just crushing high school sports.”

The MHSAA has shown its opposition to the use of Friday nights for televised collegiate football games for more than 15 years, dating back to 2001 when the NCAA lifted its restrictions on Friday night telecasts, which at first led to the broadcasting of “mid-major conference” games on the same night traditionally reserved for high school athletes.

The MHSAA launched in 2001 its “Save Our Friday Nights” campaign to emphasize the role that Friday night high school athletic events play in communities and to rally MHSAA member schools to contact NCAA member school football coaches, athletic directors and conference commissioners to voice their concerns.

“Everyone knows that football is struggling right now,” Roberts said. “It’s getting a lot of bad publicity. Participation is declining. And now this; there couldn’t be worse timing.”

In his Nov. 11 Blog, Roberts blogged the following: “The Big Ten Conference likes to say it ‘appreciates’ high school football within its footprint; but the evidence is otherwise. First, in 2010 the Big Ten adopted a ‘bye week’ to stretch its scheduling that pushed the final game of the Big Ten regular season – with its great rivalries, including Michigan vs. Ohio State – to the day on which the high school Football Finals have been scheduled in Michigan for more than three decades. A periodic problem became an every-year plague.

Now the Big Ten has announced it will play and televise games on Friday nights; and in its first year of this new deal, Michigan State will play at Northwestern in a televised game on Friday night, Oct. 27 – the first night of the MHSAA Football Playoffs all across our state.

So, in 2017 we can thank the Big Ten for damaging the first as well as the last weekend of our high school Football Playoffs.

The Big Ten’s reaction? “We are only playing six games on Friday nights. It could have been much worse.

“I expect it will get worse. The greed of college sports knows no limits.”